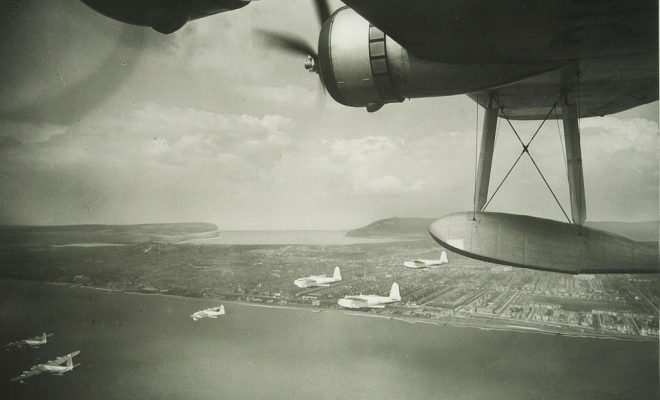 Image courtesy of Photos of the Past; License: Public Domain

In 1948, H. Edward Spires was discharged as “undesirable” from the military because he was gay. On Friday, his discharge was finally updated to “honorable,” after almost 70 years. “My first thought was, ‘it’s about time,” Spires said on Monday. “I can lift my head again.” One of the law students who worked on the case, Erin Baldwin, doesn’t know why the Air Force changed its mind, since Spires has requested the change several times. “I’m not sure we can say with certainty but it was helpful that he had support from a lot of different places,” she said.

When the “Don’t Ask, Don’t Tell” policy, which banned openly homosexual soldiers from serving in the military, was repealed in 2011, Spires became qualified to ask to upgrade his discharge. But the Air Force claimed that a 1973 fire had destroyed his military records, and denied his application. In November, a group of law students from the Yale Veterans Legal Services Clinic helped Spires and his husband David Rosenberg, who is also a veteran, file a federal lawsuit. Spires is currently recovering from pneumonia, which made the issue even more pressing.

Finally, the military granted his request. In a letter signed last Thursday, the Air Force Board for Correction of Military Records acknowledges Spires’ request and writes, “Sufficient relevant evidence has been presented to demonstrate the existence of an injustice.”

Spires enlisted in the military when he was 20 years old, in 1946. He was assigned the role of a chaplain’s assistant at the Air Force Base in San Antonio and was soon promoted to the rank of sergeant. He told NBC in November that he lived a closeted life whenever he was at the base. Spires loved San Antonio and was part of a small community of other closeted gay men. But all of that changed when he went to a Halloween party dressed as the soap Oxydol, which was advertised at the time as very sparkly. So Spires dressed “very sparkly and that was taken as being in drag,” he said. “Someone at the party recognized me and said, ‘Ah-ha! He must be gay.’”

After that, the military treated him differently; officers interrogated him for weeks, asked personal questions about his life, and sent him to meet a board of inquiry every day for a week. Spires was too ashamed to tell his mother what was going on, even though she came to visit him at the same time as the trial. He said:

I had to be my own attorney. They did not furnish me an attorney because I was thought of as nothing. They were already convinced I was gay and that I was guilty. […] I can’t tell you how terrible it was. I couldn’t tell her, I can’t spend days with you because I’m on trial.

He collapsed under the pressure, and was discharged because of “undesirable habits and traits of character,” in June of 1948. He never came out to his parents, but met his husband in 1956 and married him in 2009. Rosenberg said that there was a big difference in how the military treated the two men; his husband was honorably discharged despite being gay. “It is an injustice that the military has treated Ed and me so differently, despite our equal honorable service,” he said at a press conference in November.

But finally, Spires’ will has been granted and he can relax. The couple said that they will celebrate in Florida next month. Spires said, “I’m still recovering from pneumonia but every day seems a little brighter. This is one thing less on my mind…I can smile again.”

Emma Von Zeipel
Emma Von Zeipel is a staff writer at Law Street Media. She is originally from one of the islands of Stockholm, Sweden. After working for Democratic Voice of Burma in Thailand, she ended up in New York City. She has a BA in journalism from Stockholm University and is passionate about human rights, good books, horses, and European chocolate. Contact Emma at EVonZeipel@LawStreetMedia.com.
Share:
Related ItemsAir ForceDon't Ask Don't TellGayGay RightsH. Edward SpiresHonorable DischargeMilitarySoldiersUndesirable DischargeVeteransWorld War II