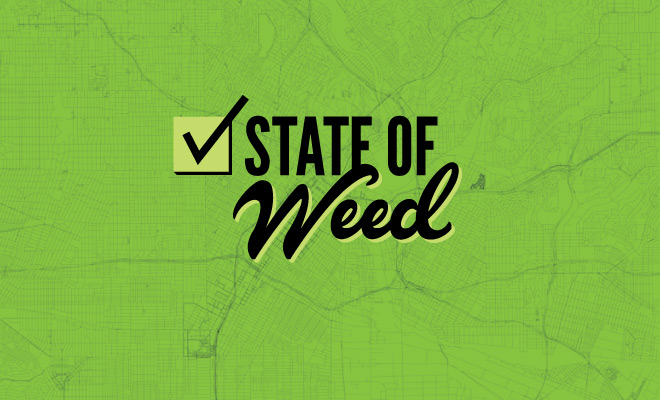 The State of Weed: Marijuana Legalization State by State

In recent decades, marijuana legalization has continuously evolved in the United States, as opposition against the drug continues to wane amidst new research on the drug’s effects and criticism of the U.S.’s handling of the “War on Drugs.” Four states and the District of Columbia have legalized marijuana for recreational use, and 25 total states have legalized marijuana for medical use.

In November, a total of nine states voted on marijuana legalization. California, Maine, Massachusetts, and Nevada all voted to legalize recreational marijuana. Arizona voters shot down their legal pot ballot measure. In addition, Florida, Arkansas, and North Dakota voted to legalize marijuana for medical purposes, while Montana voters chose to expand the parameters of their existing medical marijuana program.

The map below displays each state’s current marijuana legalization status, from illegal to full legalized recreational use, as of February 3, 2017.

The State of Weed Map

According to Gallup polls, one in eight U.S. adults say they smoke marijuana and 58 percent of Americans believe marijuana should be legal in the U.S. As cannabis initiatives continue to find traction and make their way onto ballots, understanding the intricacies of each state’s marijuana laws will become increasingly important.

Patients who use medical marijuana will need to know things like whether or not they can travel with the drug and use it in other states, and in cities where the drug is decriminalized mere fractions of an ounce could make the difference between low fines or substantial jail time. The following slide show contains information on each states’ marijuana laws in regards to possessing, selling, and cultivating weed, although please note that this is intended as a basic resource and does not include the entirety of provisions in any given state. This is the “State of Weed.”

Go Directly to Your State:

Exceptions: Medical cannabidiol or CBD, a cannabis extract high in CBD and low in THC, is legal for patients with debilitating epileptic conditions and a few other approved conditions.

Alexis Evans
Alexis Evans is an Assistant Editor at Law Street and a Buckeye State native. She has a Bachelor’s Degree in Journalism and a minor in Business from Ohio University. Contact Alexis at aevans@LawStreetMedia.com.
Share:
Related ItemsCannabis in AmericaMarijuana LegalizationThe State of Weed