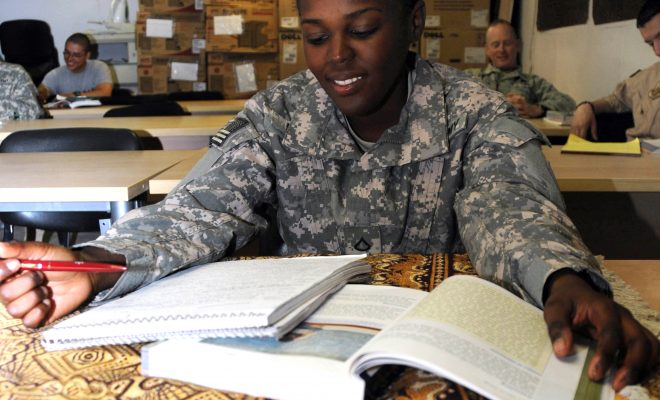 The Senate unanimously passed a $3 billion expansion to the G.I. Bill on Wednesday, paving the way for veterans to pursue STEM careers while bolstering existing benefits. President Donald Trump is expected to sign the measure, which the House passed last week, also in a unanimous vote. The original G.I. Bill was created after World War II, allowing returning veterans to receive an education in return for their service.

Named after Harry Walter Colmery, a veteran who drafted the original 1944 bill, the expanded benefits “will further invest in the proven educational success of our veterans and help propel them toward becoming the civic, business and public leaders of our country,” according to the text.

The measure expands financial assistance and other benefits for Purple Heart recipients, families of soldiers killed on the battlefield, and veterans who pursue careers in science, technology, engineering, or mathematics, also known as STEM fields. It also repeals the 15-year benefits limit.

“When new industries emerge and we rely on American workers to fill those jobs, it shouldn’t matter if a veteran is five, 15, or 30 years out of the service,” Representatives Kevin McCarthy (R-CA) and Phil Roe (R-TN) wrote in an op-ed after the House passed the measure. “If you haven’t used your benefits yet, you should be able to get an education at any point in your life,” McCarthy and Roe, chairman of the House Veterans’ Affairs Committee, wrote.

After a brief disagreement on how the expanded benefits would be funded, Congress settled on a solution: reduce the increase in housing benefits for new beneficiaries. The Congressional Budget Office estimates that the measure, which will cost $3 billion over a decade, will ultimately be cost neutral.

Senator Johnny Isakson (R-GA), chairman of the Senate Veterans’ Affairs Committee, called the bill a “great victory for out veterans and their future.” He added: “When our veterans return home, they should have every opportunity available to them to pursue their desired profession and career.”

Senator Jon Tester (D-MT), the ranking Democrat on the committee, said the measure “will help our nation’s service members transition back to civilian life by opening doors for their future success.”

The #ForeverGIBill strengthens an important #Veterans benefit. I thank the House and Senate for making this bill a priority.

Alec Siegel
Alec Siegel is a staff writer at Law Street Media. When he’s not working at Law Street he’s either cooking a mediocre tofu dish or enjoying a run in the woods. His passions include: gooey chocolate chips, black coffee, mountains, the Animal Kingdom in general, and John Lennon. Baklava is his achilles heel. Contact Alec at ASiegel@LawStreetMedia.com.
Share:
Related ItemsG.I. BillJobsSTEMVeteransVeterans Affairs