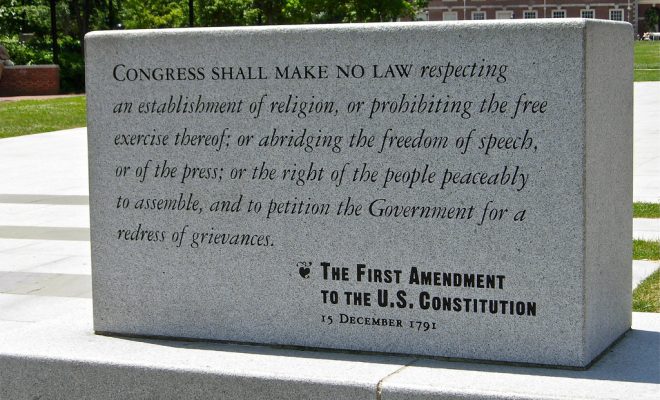 Is the Separation of Church and State Over?

Over the last several years, the separation of church and state has become a prominent part of many legal battles. From the White House to the Supreme Court, the government has started to reinterpret a legal concept that dates back to the founding of the country. But where exactly did the notion that the government and religious institutions should be distinct come from? Read on to find out more about the history of the division of church and state in the United States and whether or not that distinction is in danger of eroding.

History of Church and State

The United States was founded in part by people fleeing persecution at the hands of state-sponsored religions. However, even after crossing the Atlantic, many of these same people were still under threat of religious persecution. The crown attempted to make the Church of England the official church of the American colonies. That effort was put to bed as part of the revolution and may have even galvanized efforts to separate religion and the government at the nation’s founding. Individual states also rolled back their own efforts to establish state-sponsored religions. Part of the impetus behind this effort was the writings of many thinkers from the Enlightenment and Protestant Reformation, which had important effects on the Founding Fathers as they wrote the Constitution.

Although the notion that there should be a division between church and state has been around for more than 200 years, it is not explicitly mentioned anywhere in the Constitution. The first recorded mention of the concept comes from a letter written by Thomas Jefferson to a Baptist Association in Connecticut. The idea gained traction and was first used by the Supreme Court in a decision in 1879. By 1947 it had essentially become a central part of constitutional law when it was cited as such in the Supreme Court decision in Everson v. Board of Education.

While the specific phrase, “the separation of church and state,” is not in the Constitution, the distinction is implicit in several aspects of the document. First would be Article VI, which requires that all government officials swear loyalty to the Constitution and prohibits religious tests for public officials. Second is the Establishment Clause of the First Amendment, which prohibits the government from establishing any state-sponsored church. Lastly, is the Free Exercise Clause, which prohibits Congress from making laws against any religion. These provisions were later extended to the states following the adoption of the 14th Amendment.

These constitutional provisions and others have been used in a number of prominent Supreme Court cases, aside from the two previously mentioned. In 1948, in McCollum v. Board of Education, the Establishment Clause was invoked when the court ruled that religious instruction in public schools is unconstitutional. In 1952, in Burstyn v. Wilson, the court ruled that a state government cannot censor a movie simply because it offended people’s religious beliefs.

In the 1962 case Engel v. Vitale, the court ruled that school-sponsored prayer is unconstitutional. In 1968, a state statute banning the teaching of evolution was deemed unconstitutional. Three years later, in Lemon v. Kurtzman, the court created a test to determine if a government action violated the precedent of the separation of church and state. The test has three parts and can be used to evaluate a law’s constitutionality:

First, the statute must have a secular purpose; second, its principal or primary effect must be one that neither advances nor inhibits religion; finally, the statute must not foster an excessive government entanglement with religion.

In Allegheny County v. ACLU, the court determined in 1989 that nativity scenes in public buildings violated the Establishment Clause. In the case Church of Lukumi Babalu Aye., Inc. v. Hialeah, the court ruled in 1993 the city’s ban on animal sacrifice as part of religious exercise was unconstitutional. There are many other cases as well, but these notable examples show that the Court has actively defined a level of separation between the church and state over the years.

In several recent cases, however, the pendulum seems to be swinging back to less separation between the church and state. One example comes from 2014 when the court ruled that Hobby Lobby, a privately-owned company, could refuse to provide health insurance that covers birth control to its employees on the basis of the owners’ religious beliefs. The ruling created an exception to the Affordable Care Act’s requirement that all employer-provided health insurance plans must cover contraception.

In another ruling from June, in the case Trinity Lutheran Church vs. Comer, the court weighed in on an issue that could have a major impact on the divide between church and state. This case centered around whether a private, religious school could use public funds for a secular project–namely rubberizing its playgrounds. While the state had initially ruled against the school because it was a religious organization, the Supreme Court ultimately ruled in its favor because it viewed the state’s denial to grant the school funding as discriminatory.

This ruling, in particular, is important for two reasons. First, it seemed to suggest that Blaine Amendments are unconstitutional. The Blaine Amendment was a failed amendment to the Constitution from 1875, which prohibited funds raised through taxes from going to religiously affiliated institutions. Although the effort failed, 35 states currently have their own laws that prevent public funds from going to religious groups.

The second major potential consequence of the Trinity Lutheran case concerns the extent to which this ruling will apply to funding for other activities conducted by religious organizations. Four of the justices attempted to head off this potential problem by clarifying in a footnote that the decision only applied to playgrounds. However, since only four of the nine justices signed off on the footnote, it is technically not the opinion of the court. The ambiguity there will likely result in future legal challenges, as religious groups will seek to identify new areas where they are eligible for public funding.

The video below discusses the facts of the Trinity Lutheran case in further detail:

When it comes to the separation of church and state, like many other issues, the president has so far taken a seemingly idiosyncratic approach that may contrast with some of his campaign promises. In May, he signed an executive order that weakened the Johnson Amendment–part of a law that prevented religious organizations from getting directly involved in politics. That order was actually less controversial than what many expected based on Trump’s campaign rhetoric, although it remains to be seen whether he will take more aggressive action in the future.

Less moderate is the viewpoint of President Trump’s Secretary of Education, Betsy DeVos. DeVos has been an avid proponent of religious charter schools and even helped finance the campaigns of politicians who supported them. One of the fears following the Trinity Lutheran decision was that it opened a path to funnel tax dollars to religious charter schools, whose curricula would still not be overseen by the government.

The notion of the separation of church and state has existed in the United States for hundreds of years, and in Western Civilization long before that. Although the term is not explicitly used in the Constitution, the division has been established by the courts through their interpretation of it, particularly the Establishment Clause of the First Amendment. Over the years this specific clause, as well as a few others, has been used repeatedly to strengthen the divide between church and state.

However, the interpretation of the separation seems to have shifted in recent years, as the perception of an anti-religious bias has grown among many on the right, which the Supreme Court has reflected in its opinions. The clearest evidence comes from the recent Trinity Lutheran Church case, which not only allowed a religious school access to public funds but the opened door for future efforts to direct public money to religious organizations.

This opening presents an unclear path forward. While it is unlikely anyone will try to overtly knock down the proverbial wall between church and state, there are indications some holes might be drilled. While the extent of the recent shift is hard to determine, it does seem likely to continue.

Michael Sliwinski
Michael Sliwinski (@MoneyMike4289) is a 2011 graduate of Ohio University in Athens with a Bachelor’s in History, as well as a 2014 graduate of the University of Georgia with a Master’s in International Policy. In his free time he enjoys writing, reading, and outdoor activites, particularly basketball. Contact Michael at staff@LawStreetMedia.com.
Share:
Related ItemsChurch and StateConstitutionReligionSupreme Court