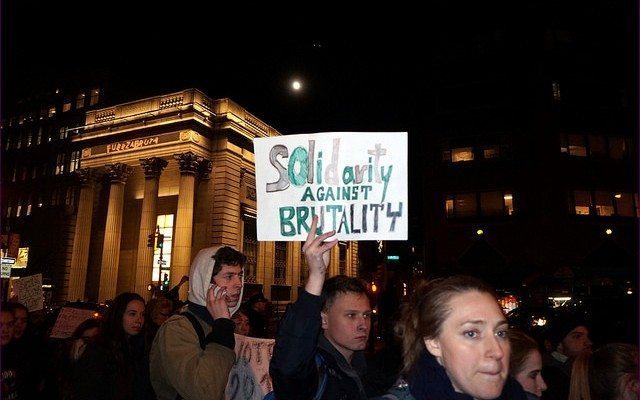 One of my favorite parts of my job here at Law Street is that I get to work with incredibly intelligent individuals with whom I occasionally disagree. Blogger Allison Dawson is one of those people. Today, she wrote a piece entitled “Columbia Law Students Can Postpone Exams in Light of Grand Jury Decisions.” It’s a great take–but I think there are a couple important points missing.

For some context, here’s the background: in light of the incredibly controversial and nation-sweeping announcements that grand juries in Missouri and New York failed to indict the cops who killed Michael Brown and Eric Garner, respectively, Columbia University Law School made an announcement. It regarded the reactions that some of the students may be having to those verdicts, and offered counseling, opportunities to talk to professors regarding the indictment, and this:

The law school has a policy and set of procedures for students who experience trauma during exam period. In accordance with these procedures and policy, students who feel that their performance on examinations will be sufficiently impaired due to the effects of these recent events may petition Dean Alice Rigas to have an examination rescheduled.

There’s a crucial part there that I want to make sure we’re all very cognizant of, and that’s that a Columbia Law student can’t just walk into Dean Rigas’ office and say “hey, I’m feeling weird about these indictments, can I take those exams later?”

The Academic Procedures outlined by Columbia make it pretty clear that petitioning to not take an exam isn’t really an easy practice. It certainly seems that a petition is by no means a guarantee to skip an exam, and that Columbia takes petitions pretty seriously. Columbia’s policy states:

Some petitions can be decided on within two to seven business days; others may require a meeting of the Rules Committee or the faculty and will take longer. It is advisable to make your petition as early as possible and not to assume the results of a petition.

A follow-up letter makes it seem like they really would only allow someone to postpone an exam under rather dire circumstances. The Vice Dean for Curriculum, Avery Katz wrote:

Accordingly, students who wish to request a rescheduled exam, or other similar accommodation, should either write to the office of Registration Services with an individual explanation of the basis of the request, or speak in person with an academic counselor in the Office of Student Services.  Unless time pressure is severe, meeting with an academic counselor is the preferred alternative, in case our student services staff can offer support or other resources that may be helpful.

I truly hope that if anyone uses this to try to get out of taking an exam, that Columbia would catch it with its policies. To anyone trying that, here’s a message to you: you’re a shitty person, and you are making it harder for those who actually do need to postpone an exam. Honestly, I highly doubt that many people will end up asking to postpone their exams because of these grand juries, or that Columbia will honor those requests.

All that being said, the fact that Columbia Law is recognizing that the grand jury announcements could have been triggering for a student is excellent. I agree with Allison that our future lawyers need to be able to accept and learn from the outcomes of our legal system, but I think that’s oversimplifying what those failures to indict really mean. The grand jury decisions were symptoms of significantly larger issues in our justice system, like racial inequality, police brutality, and a culture of violence. The protests that have continued all around the nation show that these conversations didn’t stop when those grand juries made their decisions.

No one gets to dictate what could cause someone to have emotional or mental difficulties and need help. Columbia Law has policies in place that allow students to make their case if they are suffering from anything that would impede performance on exams. The letter that went out yesterday just clarified that. There will of course always be people who try to take advantage of the policy, and I truly hope Columbia Law is able to identify those people. But the fact that Columbia is taking such a progressive view on mental health and triggers is truly refreshing. It’s the thought that counts, and for Columbia Law, this truly was a good thought.