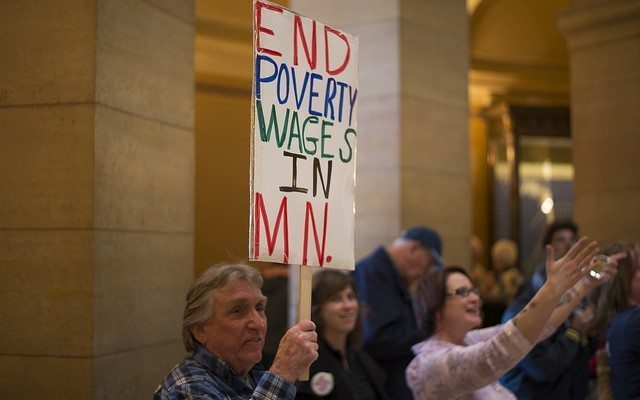 The United States of America. Land of the free, home of the brave. Doesn’t that have a nice ring to it?

Anyone from anywhere, regardless of socioeconomic class, religion, or culture can come and make a name for themselves in the United States. We believe in “Life, Liberty and the Pursuit of Happiness.” Pull yourself up by your bootstraps, set your mind on the prize, and go claim what is yours.

Yet each year the range in wealth disparity increases, rendering it more difficult–to a point where it is impossible to succeed economically.

As the standard of living increases, the federal minimum wage should increases respectively.

A step forward in the right direction was the Minimum Wage Act of 2012, specifying that the federal minimum wage would be increased to $9.80 by 2014.

The question is often asked, why raise minimum wage? This video explains why.

Minimum wage is a mechanism the protects the Average Joe, the working class. The issue is that the “Average Joe” ten years ago is nothing like “Joe” in the status quo. The cost of living has increased exponentially, so much that individuals paid at a minimum wage can barely support themselves, let alone a family.  Often times, families have to rely on food stamps and governments subsidies on a daily basis just to survive.

With an increased minimum wage, the government will be inherently be removed from the lives of Americans across the country and a free market will be able to flourish.

With an increased minimum wage, the gap in wealth subsequently decreases. Individuals, along side their families, have more money to spend and invest. Not only does this end the cyclical process of poverty and create a stronger middle class, but it provides for a stronger economy.

The United States should want to encourage these people to move up to the higher echelons in society, not keep them in the current cycle of cyclical poverty. If we increased the minimum wage, we would inherently have less people on food stamps and government programs, thus more people would be supporting the free market.

By increasing the minimum wage, not only with the United States shrink its ever growing wealth gap, but it will improve the lives of millions of Americans.