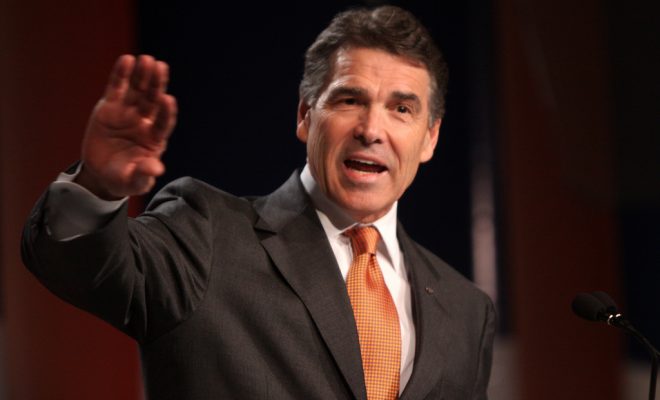 Secretary of Energy Rick Perry apparently spent 22 minutes on the phone last week discussing international energy issues with someone who he believed was Ukrainian Prime Minister Volodymyr Groysman. Unfortunately for Perry, the call was a prank from Russian jokesters posing as Groysman. They discussed, among other topics, a fuel that is made from home-brewed alcohol and pig manure.

Perry was duped by Vladimir “Vovan” Kuznetsov and Alexei “Lexus” Stolyarov, who are known for pranking high-profile celebrities. Perry and the duo talked via a translator so the American politician was convinced the man he was corresponding with was Groysman. Besides the alternative fuel, Perry discussed underwater pipelines for gas, cyber attacks on America, natural gas in Ukraine, and even the Paris Accords, according to Bloomberg.

“Our position is that it’s our record that should be looked at, not whether or not we have signed onto some international accord,” Perry said. “We see our record of progress relative to the global environment to be substantially defensible.”

The pair even inquired if Ukraine could strike a deal on American coal exports, to which Perry responded that negotiations are always possible.

(FYI: the entire conversation was uploaded to a Russian video streaming site and can be found here.)

The prank phone call was first reported by E&E News. After the hoax was discovered, Perry’s office commented on the matter in an email to the Washington Post:

Secretary Perry is the latest target of two Russian pranksters.These individuals are known for pranking high-level officials and celebrities, particularly those who are supportive of an agenda that is not in line with their governments.

The duo, known as the “Jerky Boys of Russia,” claims to have pranked celebrities such as Elton John, Turkish President Recep Tayyip Erdogan, and John McCain, but rumor-debunking site Snopes notes that while some instances are true, such as McCain’s call, others remain unverified.

The situation is perhaps even more confusing since Perry and Groysman met in person just last month. On June 20, Perry hosted Groysman and his entourage at the Department of Energy office in Washington D.C., according to the Washington Post. So when Perry’s office received a call requesting a follow-up conversation, they assumed it was the Prime Minister. Instead it was the young Russians scheduling their prank.

After serving as governor of Texas from 2000 to 2015, Perry was the second contestant eliminated on ABC’s “Dancing With The Stars,” (though it’s debatable how much of a star Perry really is.) Besides competing on the reality show, Perry has famously been pretty gaffe-prone throughout his career. During a Republican Presidential Debate in 2011 Perry forgot which government agencies he vowed to abolish. Then, in 2013 Perry was giving a speech in New Orleans when he mistakenly said he was in Florida.

Perry has the political resume to lead the Department of Energy, but these juvenile gaffes should worry some Americans as we enter an era in our country where the debate over climate change is fierce. Citizens can only hope that mistakes like these don’t eventually endanger American interests at home or abroad when it comes to the energy sector.

Josh Schmidt
Josh Schmidt is an editorial intern and is a native of the Washington D.C Metropolitan area. He is working towards a degree in multi-platform journalism with a minor in history at nearby University of Maryland. Contact Josh at staff@LawStreetMedia.com.
Share:
Related ItemsDepartment of EnergyEnergyPoliticsPranksRick PerryRussiaTexasUkraineUnited States