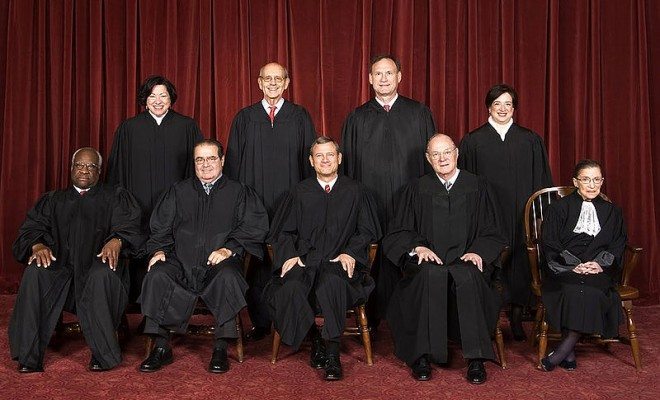 What happens when two Supreme Court Justices, who rarely rule the same way, sit down for an hour-long conversation on the First Amendment? Surprisingly, a lot of laughs, and some strong opinions about free speech. On Thursday, April 17, Justices discussed the First Amendment on the Kalb Report at the National Press Club.

Justices Antonin Scalia and Ruth Bader Ginsburg couldn’t be more ideologically different- Scalia is an originalist, meaning the Constitution should be interpreted as it would have been when it was created. Ginsburg, on the other hand, sees the Constitution as a living document, one that can be interpreted differently based on how society has evolved.

But for being so different in their opinions, the two agreed on the most basic idea that freedom of speech is a necessary function of democracy.

“The right to speak my mind, that’s America to me,” Ginsburg said.

Scalia seemed to agree, saying, “democracy means persuading one another […] you can’t run such a system if here is muzzling of one point of view.”

The two didn’t agree for long, though. One discussion over the case New York Times v. Sullivan elicited two very different opinions from the Justices.

Times. V. Sullivan was the case that holds public officials have a much harder time suing for libel. Basically, unless they can prove someone made libelous comments on purpose, they don’t have a shot at a lawsuit.

Scalia had no time for that, saying the founding fathers “would have been appalled at the notion they could be libeled with impunity,” and that rather than interpreting the Constitution, the Times v. Sullivan decision revised it.

Ginsburg disagreed, saying, “Times v. Sullivan is now well-accepted […] I suspect that if the founding fathers were around to see what life was like in the 1960s, they would have agreed with that.”

The conversation also pointed to the fact that while the Justices may support First Amendment Rights, it doesn’t mean they agree with the ways in which people utilize those rights.

“You can be using your 1st amendment right and it can be abominable that you are,” Scalia said and continued with,  “I will defend your right to use it, but I will not defend the appropriateness of the manner in which you’re using it now- that can be very wrong.”

Specifically, Ginsburg referred to a case, which Scalia ruled on, that held flag burning was Constitutionally protected, even though he did not personally agree with the idea of it.

“I would have thrown that guy in jail if I were king,” alluding to the fact in a democracy, we don’t have that option.

The First Amendment Debate isn’t Over:

At one point, Ginsburg referenced a case the Supreme Court will hear next week, questioning whether it is legal to lie about candidates running for office.

The case is Susan B. Anthony List v. Driehaus, and it challenges an Ohio law that says groups and individuals can’t make false statements about political candidates. The court will be tasked with deciding whether or not false statements in the context of political races are protected speech.

Though it’s hard to tell how the court will rule, there have been other cases that deal with lies in relation to free speech. In 2012, the court ruled that a man who lied about receiving the Medal of Honor was protected by free speech. In 2006, after Xavier Alvarez lied about receiving a military award, he was prosecuted under the “Stolen Valor Act,” which made it illegal to do so.

Precedent for the Case:

The court held 6-3 that the First Amendment protected Alvarez’s lie. Ginsburg was in the majority; Scalia was not.

The opinion state specifically, “the Court has instructed that falsity alone may not suffice to bring the speech outside the First Amendment; the statement must be a knowing and reckless falsehood.”

The combination of Alvarez and Times as precedent will be make for an interesting decision by the Court, and Ginsburg and Scalia could very easily end up on different sides of the decision again.

But through the differing opinions on how to interpret the Constitution, Ginsburg and Scalia have remained close friends.

When Kalb asked Ginsburg if she would have voted in favor of the Times case, Scalia jumped in saying, “oh God yes she would have!”

At another point, Ginsburg poked fun at Scalia after he mentioned using telephone booths, saying, “we don’t have to worry about that anymore!”

The moderator, Marvin Kalb, seemed to appreciate the dynamic between the two, saying “they are like the old days in this capital when political differences did not stop a good friendship from flourishing.”

Having two Justices discuss not just their friendship, but views on issues as decisive as the First Amendment, as well, gives the public a great inside look into the reasoning behind Supreme Court decisions. While they had vastly different ideas about how laws should be interpreted, they both had strong reasoning behind their opinions, and respected each other as people regardless of their professional views.

You can watch the whole program here.

Featured image courtesy of [Steve Petteway, College of the Supreme Court of the United States via Wikipedia]