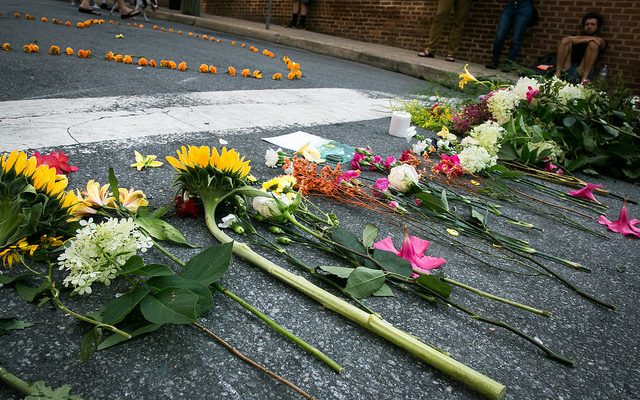 What Happens When the First Amendment Is Used to Protect Hate?

After Saturday’s white supremacist riots and violence against counter-protesters in Charlottesville, Virginia, community members in the city and people nationwide are still reeling. Reported Nazi sympathizer James Alex Fields, Jr., plowed his gray Dodge Challenger through a group of counter-protesters, killing 32-year-old legal assistant Heather Heyer and injuring at least 19 others. Fields has been charged with second-degree murder, three counts of malicious wounding, and one count of hit and run.

In an interview with NPR’s David Green, Virginia Governor Terry McAuliffe explained that the city of Charlottesville had tried to relocate the rally to a more open park about a mile and half away from Emancipation Park, outside of downtown Charlottesville. However, the ACLU of Virginia joined a lawsuit against Charlottesville after the city refused to allow “Unite The Right” organizer Jason Kessler and his supporters to access Emancipation Park on Saturday for the previously approved demonstration.

“That rally should not have been in the middle of downtown – to disperse all those people from the park where they dispersed all over the city streets,” McAuliffe told NPR. “And it became a powder keg. And we got to look at these permits, and we got to look at where we put these rallies and protesters. I got to protect public safety.”

The ACLU of Virginia’s Executive Director Claire G. Gastanaga fired back at McAuliffe on Monday, condemning the violence that took place in Charlottesville but defending her organization’s involvement in the lawsuit against the city.

“We asked the city to adhere to the U.S. Constitution and ensure people’s safety at the protest,” Gastanaga said. “It failed to do so. In our system, the city makes the rules and the courts enforce them. Our role is to ensure that the system works the same for everyone.”

She said the city had failed to present sufficient evidence to the judge that moving the location of the rally would in fact result in no demonstration in downtown Charlottesville, instead of creating a situation in which the city would have to deal with two demonstrations in two separate locations.

“But let’s be clear: our lawsuit challenging the city to act constitutionally did not cause violence nor did it in any way address the question whether demonstrators could carry sticks or other weapons at the events,” Gastanaga said.

Over the years, the ACLU has taken somewhat of an absolutist stance on First Amendment rights, even defending speech that it hates. The organization was recently criticized by one of its own attorneys after the ACLU decided to defend Milo Yiannopoulos, a writer and speaker who is infamous for espousing hate against people of color, Muslims, immigrants, transgender people, and other marginalized individuals.

The events in Charlottesville and the ACLU’s defense of the constitutional rights of white supremacists, Nazis, and other hate-mongers raises an important question: what happens when the First Amendment–or any constitutional right for that matter–is used to protect hate and oppress other people?

In United States v. Schwimmer (1929), a pacifist applicant for naturalization was denied U.S. citizenship because she expressed that she “would not take up arms personally” in defense of the country. In his dissenting opinion, Justice Oliver Wendell Holmes asserted that the Constitution protects thoughts that we may not agree with.

“Some of her answers might excite popular prejudice, but if there is any principle of the Constitution that more imperatively calls for attachment than any other it is the principle of free thought–not free thought for those who agree with us but freedom for the thought that we hate,” Holmes wrote.

That idea has been applied in other cases over the years and has evolved to include hate speech as part of protected speech. The Supreme Court upheld that principle in June when it reaffirmed that hate speech is protected under the First Amendment. Matal v. Tam dealt with the right of Asian American musician Simon Tam and his band “The Slants” to trademark their band name. The band’s trademark application was originally denied because of the band’s inclusion of a racial slur used to refer to Asians in their name.

Justice Samuel Alito wrote that the government’s restriction of “speech expressing ideas that offend … strikes at the heart of the First Amendment. Speech that demeans on the basis of race, ethnicity, gender, religion, age, disability, or any other similar ground is hateful; but the proudest boast of our free speech jurisprudence is that we protect the freedom to express ‘the thought that we hate.'”

Of course, there are exceptions to that rule as well. The “fighting words” doctrine, which arose out of the Chaplinsky v. New Hampshire (1942) decision, has been used to curtail speech used to incite violence. According to Chaplinsky, fighting words are “words plainly likely to cause a breach of the peace by the addressee, words whose speaking constitutes a breach of the peace by the speaker — including ‘classical fighting words,’ words in current use less ‘classical’ but equally likely to cause violence, and other disorderly words, including profanity, obscenity and threats.”

So where does the legality of the language used in Charlottesville fall on the protected/unprotected speech spectrum? Well, it can be a bit tricky. During the Charlottesville riots, white supremacists and neo-Nazis chanted anti-Semitic phrases like “Blood and soil,” which is derived from language that was used in Nazi Germany. However, if those chants were not spoken directly to a specific person, precedent may deem them to be hate speech but not fighting words. In other instances, rioters targeted specific individuals with racial and homophobic language. In those cases where particular individuals were singled out, a court might find that the aggressor was using fighting words.

Under current legal precedents, restrictions on free speech are not the clearest. What is clear is that hate groups are able to use discriminatory language that instills fear in marginalized communities without necessarily experiencing repercussions for that speech.

But it is also important, and perhaps more effective, to call out hate speech within our own communities. Eliminating hate speech is an important step in combating racism and other forms of hate, but people must also be willing to confront the beliefs and behavior that language is rooted in. Organizations like the subscription-based service Safety Pin Box provide substantive ways that allies can actively show their support for marginalized people, beyond mere social media posts “in solidarity.” People can also donate to anti-racism organizations and call their local, state, and national representatives in regard to specific issues. The events in Charlottesville are an overt demonstration of white supremacy, but they are only symptomatic of more systematic white supremacist structures. In order to combat white supremacy and other forms of hate, people must first address oppressive language and behavior in their own lives among family, friends, co-workers, and other community members.

Marcus Dieterle
Marcus is an editorial intern at Law Street. He is a rising senior at Towson University where he is double majoring in mass communication (with a concentration in journalism and new media) and political science. When he isn’t in the newsroom, you can probably find him reading on the train, practicing his Portuguese, or eating too much pasta. Contact Marcus at Staff@LawStreetMedia.com.
Share:
Related ItemsACLUAnti_SemitismCharlottesvilleClaire G. GastanagaEmancipation Parkfighting wordsFirst AmendmentFree SpeechHate SpeechJames Alex Fields Jr.NaziVirginiaVirginia Governor Terry McAuliffeWhite Supremacy