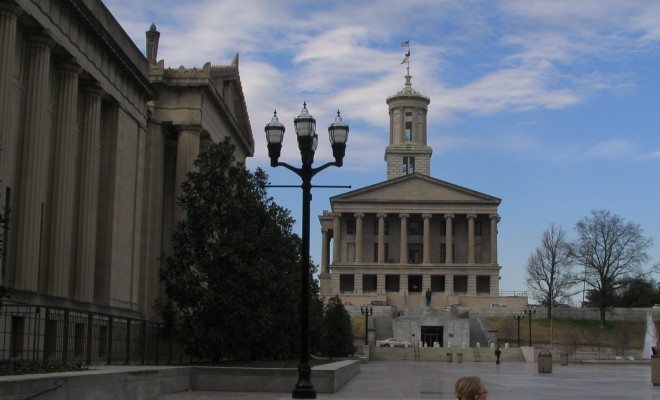 Tennessee’s governor, Bill Haslam, vetoed HB0615 yesterday, a bill that would have designated the Holy Bible as the state book of Tennessee. Before the governor’s veto, the bill was passed in the state house by a vote of 55-38 and in the senate by a vote of 19-8. While some argue that naming the Bible as the official state book would fundamentally intertwine the church and state, others argue that the Bible’s historic and economic significance make it relevant and appropriate as a state book.

Opponents of the bill were outraged by the thought of the Bible being designated as the state book for several reasons and, therefore, thankful that the governor vetoed the bill. First came the obvious question of the government promoting or advancing one religion over another. The ACLU-Tennessee Executive Director Hedy Weinberg pointed out potential issues with the legislation, saying:

Lawmakers’ thinly veiled effort to promote one religion over other religions clearly violates both the United States and Tennessee Constitutions.

Instituting the Bible as the state book would suggest the furtherance of Bible-based religions, like Christianity, over other religions that aren’t based on the bible. It would fundamentally violate the separation of church and state laid out in both the national and state constitutions.

Thank you, Gov. Bill Haslam, for taking a stand for religious liberty and against theocracy. https://t.co/MTREfE6Z9w

Others made fun of Tennessee for being a state so focused on religion with satirical and ironic tweets.

The Tennessee state senate voted to make the Bible the state book, I'm assuming because nobody there could name another one.

Hope the new official Tennessee state book doesn't fry in my hands while reading it. Think I'd rather go to hell

One state Senator, Jeff Yarboro from Nashville, recognized that, even though it may be hard for some members of the legislature to want to vote against an important symbol of their faith, they needed to consider the constitutionality of their actions. “I understand that it’s hard to vote against the Bible—no one wants to do that. We have an obligation to follow the Constitution,” Yarboro told the Tennessean.

The final argument against making the Bible the state book is one that the governor himself made, and it’s not what you might expect. Similar to what our founding fathers claimed about the separation of church and state, Governor Haslam feels that making the Bible the Tennessee state book would trivialize the Bible. He even cited the founding fathers in his argument. In a letter to Beth Harwell, the Tenessee Speaker of the House, he said,

Our founders recognized that when the church and state were combined, it was the church that suffered in the long run.

He also acknowledged the difference between religion being celebrated and openly discussed in government and the actual establishment of religion by government:

Men and women motivated by faith have every right and obligation to bring their belief and commitment to the public debate. However, that is very different from the governmental establishment of religion that our founders warned against and our Constitution prohibits.

In order to override the governor’s veto, the legislature just needs a simple majority in each chamber, which seems like it could be easily attained based on the original vote counts. So, keep an eye on Tennessee everyone. It looks like it could soon become the first state to recognize a religious text as their state book and it will be interesting to see the repercussions that it may face.

Alexandra Simone
Alex Simone is an Editorial Senior Fellow at Law Street and a student at The George Washington University, studying Political Science. She is passionate about law and government, but also enjoys the finer things in life like watching crime dramas and enjoying a nice DC brunch. Contact Alex at ASimone@LawStreetmedia.com
Share:
Related ItemsACLUChurch and StateFirst AmdendmentGovernor Bill HaslamState LawsTennesseeVeto