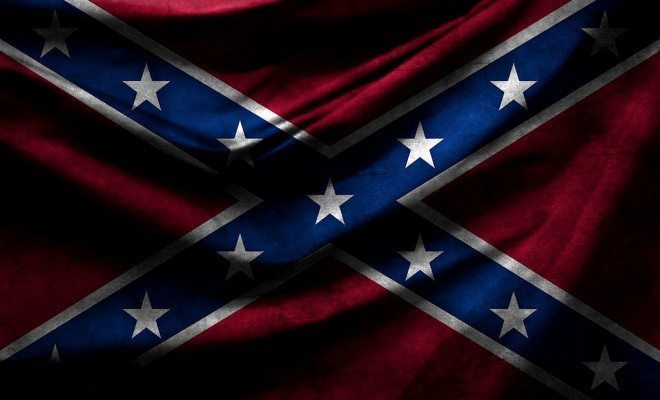 Image courtesy of [From Sovereign to Serf - Roger Sayles via Flickr]

Take Down the Flag: Protestors Rally Against Confederate Flag in South Carolina

Hundreds of people gathered at the South Carolina capitol Saturday evening to advocate for the removal of the Confederate flag from near the state capitol building. The “Take the Flag Down” event was held in response to the recent massacre of nine people at Mother Emanuel AME Church, an African American church in the heart of Charleston. Several pictures released after the shooting portray the suspect, Dylann Roof, displaying a Confederate flag. The police believe the shooting to be a hate crime, and protestors are now crying out for the removal of the flag.

South Carolina State Representative Doug Brannon, a Republican, referred to the flag as a symbol of both hate and “a symbol of pride in one’s hatred” when speaking with the Associated Press. He stated:

I just didn’t have the balls for five years to do it. But when my friend was assassinated for being nothing more than a black man, I decided it was time for that thing to be off the Statehouse grounds.

At Saturday’s rally many hoped for unity, as the event included a variety of speeches and many chanted the slogan “take it down.” “The country is calling for togetherness instead of division, so if the country truly wants togetherness then this is a way to bring it down,” said Angie White, one of the participants, stating:

My heart has been pierced by the tragedy that happened in Charleston, South Carolina, overwhelmed with grief and the hate that has permeated our country. I want to see anything that can make things better, including taking the flag down from the State House grounds. Anything that can make us a better nation, a better people, a people that the forefathers intended us to be, I want it to be done and I choose to be a part of that change.

The Confederate battle flag has long proved to be one of the most divisive issues in state politics, as it has consistently served as a symbol of intolerance and white supremacy. President of the South Carolina NAACP, Dr. Lonnie Randolph stated:

Past protests, boycotts, rallies, and movements have all failed to remove the flag from the building’s grounds. While many are not opposed to the idea of removing the flag, many believe that this weekend was not the best time, as the family and friends of the Emmanuel AME Church victims are still grieving.

In light of the recent rally, South Carolina Governor Nikki Hayley is expected to address the public this Monday afternoon. It is said that she’ll call for the removal of the flag, although it will be up to the state legislature to make the final call.

State Representative Doug Brannon is planning to introduce a bill in December to move the flag to the Military Museum. Brannon acknowledges that this will likely cost him re-election, but plans to introduce the bill as early as he can, which won’t be until December.

Update: 5:09pm: In a 4PM press conference, South Carolina Governor Nikki Hayley spoke about the controversial issue of removing the Confederate flag from the state’s capital.

“That flag, while an interval part of our past, does not represent the future of our state,” Hayley said. She continued:

The murderer now locked up in Charleston said he hoped his actions would to start a race war. We have an opportunity to show not only was he wrong, but that just the opposite is happening.

She laid out her plan for the change, stating:

The General Assembly wraps up their year this week, and, as governor, I have the authority to call them back into session under extraordinary circumstances. I have indicated to the House and the Senate that, if they do not take measures to ensure this debate takes place this summer, I will use that authority for the purpose of the legislature removing the flag from the Statehouse grounds. That will take place in the coming weeks, after the regular session and the veto session have been completed

Upon the announcement of the state’s decision to remove the flag, Hayley also reminded us of the nine victims we recently lost and are still grieving.

I also ask that the focus still remains on the 9 victims of this horrible tragedy. […] We all deserve time to grieve, and to remember, and to heal. We will take it, and I ask that you respect it.

Angel Idowu
Angel Idowu is a member of the Beloit College Class of 2016 and was a Law Street Media Fellow for the Summer of 2015. Contact Angel at staff@LawStreetMedia.com.
Share:
Related ItemsCharlestonConfederateConfederate FlagDoug BrannonDylann RoofEMENikki HayleySouth Carolina