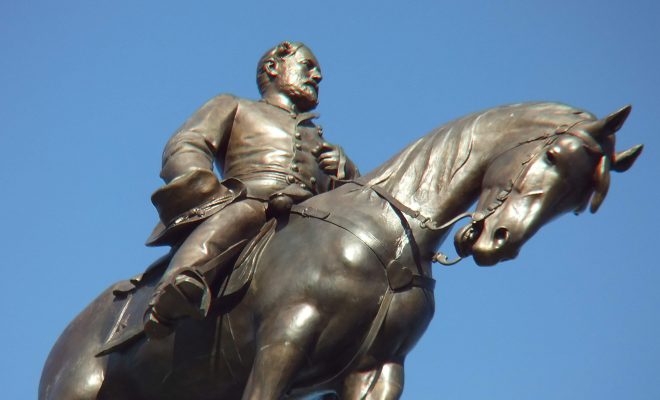 Heritage or Hatred?: The Removal of Confederate Monuments

Over the weekend, there was yet another clash between protesters over a Confederate monument. This time, the monument in question was an equestrian statue of General Robert E. Lee, located in Charlottesville, Virginia. On June 5, the Charlottesville City Council voted to change the name of the park where the statue is located from Lee Park to Emancipation Park, following up on its February decision to remove the statue. It was one block away from this location that two separate protest groups squared off: the Loyal White Knights of the Ku Klux Klan versus a crowd of counter-protesters calling for the statue’s removal. The clash resulted in 22 arrests, according to the Washington Post.

The controversy over the Lee statue in Charlottesville is only the latest in a string of decisions and incidents relating to the removal of Confederate monuments. Read on to learn which statues have been removed so far and what both sides of the debate are saying.

The catalyst for this debate was the 2015 Charleston church shooting, in which 21-year-old Dylann Roof killed nine parishioners of the Emanuel African Methodist Episcopal Church. Upon his arrest, Roof admitted to police that the shooting was meant to start a race war. Roof’s manifesto website and Facebook page were also discovered to contain photos of himself posing with several racist symbols, the most prominent being the Confederate flag.

Following the shooting, protesters took to the South Carolina State House in Columbia to demand the removal of the Confederate flag, which had flown on the state house’s grounds since 1961. Several South Carolina legislators supported the flag’s removal, but the cause only received national attention after police arrested 30-year-old Bree Newsome for climbing the flagpole and removing the flag on June 27, 2015. Two weeks later, the legislation passed and the flag was lowered for the final time.

Thousands gathered to watch the flag-lowering ceremony, but not everyone was celebrating. War reenactor Kenneth Robinson and his fellow “soldiers” held a vigil at the state house to “remember the 650,000 casualties of the Civil War,” he told WRAL. “Nine lives matter,” Robinson said referring to the church shooting victims. “All deaths matter, period.”

Cindy Lampley, another reenactor and a descendant of Confederate soldiers, worried that the flag removal would dishonor her relatives. “I think it’s important that we remember them,” she said. “It’s a sad day for me that my ancestors will no longer see their flag flying next to their memorial.”

Which Monuments Have Been Removed So Far?

The debate over the removal of the state house’s Confederate flag has since branched out to include all monuments and memorials to the Confederacy. As opposition grew, state and local lawmakers began to remove several of the Confederate symbols. Here are some recent examples:

Shortly after the Charleston church shooting, New Orleans Mayor Mitch Landrieu called for the removal of four Confederate era monuments. The monuments consisted of three statues of Confederate leaders–Lee, General P.G.T. Beauregard, and President Jefferson Davis–as well as a memorial to the Battle of Liberty Place, an 1874 insurrection by the Crescent City White League.

The New Orleans City Council voted to remove all four monuments in 2014, but it wasn’t until April 2017 that the first of them–the battle memorial–was finally removed. The rest of the statues quickly followed suit, and the final Confederate statue of Lee was removed in May. The city replaced the statues of Lee and Davis with public art and a flag, respectively, but has not disclosed plans for the relocation of the actual monuments.

“These monuments celebrate a fictional, sanitized Confederacy; ignoring the death, ignoring the enslavement, ignoring the terror that it actually stood for,” Landrieu said as Lee’s statue was hauled away by crane.

The Monument Fund, the Virginia Division Sons of Confederate Veterans, and other groups filed a lawsuit against the city in June, claiming that renaming the parks would be illegal. Attorneys also claim that the deed in which the park land was granted to the city specifically states that the park cannot be renamed. The court has not filed an injunction preventing the city from renaming the parks, but the Lee statue will remain in place until a hearing begins next month.

Mayor Levar Stoney announced on June 25 that he had charged a 10-member commission with finding ways to contextualize the city’s Confederate monuments. The Monument Avenue Commission has set up a website seeking public input to “make recommendations to the mayor’s office on how to best tell the real story of [the] monuments.” There are no concrete plans currently in place.

Stoney went on to say that he does not support the outright removal of the monuments. “I wish these monuments had never been built, but like it or not they are part of our history in this city, and removal will never wash away that stain.”

Stephanie Rawlings-Blake, the former mayor of Baltimore, ordered the city to put up interpretive signs beside the city’s four Confederate monuments. The decision came with less than three months left in Rawlings-Blake’s term. She admitted that it was a “short-term solution.” The city council had previously recommended that the city remove tributes to Lee and Jackson, along with a statue of Roger B. Taney.

The current mayor, Catherine Pugh, told the Baltimore Sun in May that she is exploring the possibility of removing the monuments altogether.

The Mississippi flag incorporates the Confederate flag in its top left corner. Carlos Moore, a black Mississippi resident, says the flag constitutes “state-sanctioned hate speech,” and has taken his grievance all the way to the Supreme Court. Moore intends to argue that the flag is a symbol of racism and violates the Constitution’s guarantee of equal protection for all citizens. In October, the Supreme Court will decide whether or not to take the case.

In addition, the city of McComb and all eight of Mississippi’s public universities have stopped flying the flag. The University of Mississippi announced last week that it will post signs on campus denoting which buildings were built with slave labor.

While the nation’s capital has not removed any Confederate monuments as of yet, Georgetown University renamed two of its campus buildings in April. The move was meant to atone for the university’s ties to slavery. The original names honored two school presidents who oversaw an 1838 sale of 272 slaves to fund the school. The buildings’ new names honor Isaac Hawkins, the slave whose name appeared first in the bill of sale, and Anne Marie Becraft, a 19th-century black educator. The university is also giving admissions preference to descendants of the 272 slaves. Mary Williams-Wagner, one of Hawkins’ descendants, said that the university needed to take further steps, such as identifying all descendants of the slaves sold by Georgetown.

Other colleges, such as Harvard, Duke, Yale, Princeton, and Brown, have also addressed their links to slavery and racism. Last February, Yale changed the name of one of its residential colleges from Calhoun College to Grace Hopper College, honoring a distinguished alumna and a “trailblazing computer scientist.”

Arguments For and Against Confederate Monuments

So why remove the monuments? The clearest answer is that they are offensive. The statues honor men who fought for the institution of slavery. Those in favor of removing them argue that the current U.S. government should not condone such motivations, even passively. Confederate symbols also played a role in the Charleston church shooting, proving that they can still be seen as symbols of black oppression and white supremacy. Many people are wary that they will inspire another massacre. A good portion of the country would be much happier if the statues were placed in museums and battlefield parks, away from public property.

The other side of the debate is a little more complicated. There are those, like Robinson and Lampley, who believe that removing the monuments would dishonor the memory of the Confederate soldiers who fought and died for what they believed in. There are others who see the Confederacy as Southern heritage, and believe that removing its symbols would be akin to removing it from history itself. Others are wary of a slippery slope, pointing out that Washington and Jefferson, along with 10 other presidents, owned slaves themselves. What would stop the country from removing the statues of its founding fathers?

Racial tensions in this country are running high these days, and the debate over Confederate monuments fits in to that conversation. The statues represent a different era, with different ideals and different ways of life. While the modern world has made tremendous strides toward diversity and inclusion, some of these ideologies still persist. The two schools of thought will inevitably clash, and as long as the monuments stand, the protests and counter-protests will continue.

As for the subjects of the monuments, one in particular had some relevant remarks on the subject while alive. In an 1869 letter declining an invitation to a public meeting concerning the war, Lee wrote:

I think it wiser, moreover, not to keep open the sores of war, but to follow the example of those nations who endeavored to obliterate the marks of civil strife, and to commit to oblivion the feelings it engendered.

Delaney Cruickshank
Delaney Cruickshank is a Staff Writer at Law Street Media and a Maryland native. She has a Bachelor’s Degree in History with minors in Creative Writing and British Studies from the College of Charleston. Contact Delaney at DCruickshank@LawStreetMedia.com.
Share:
Related ItemsCharlestonCivil WarConfederacyConfederate StatuesGeneral Robert E. LeeKu Klux KlanLouisianaMonumentsPoliticsRacismSouth CarolinaSouther HeritageVirginia