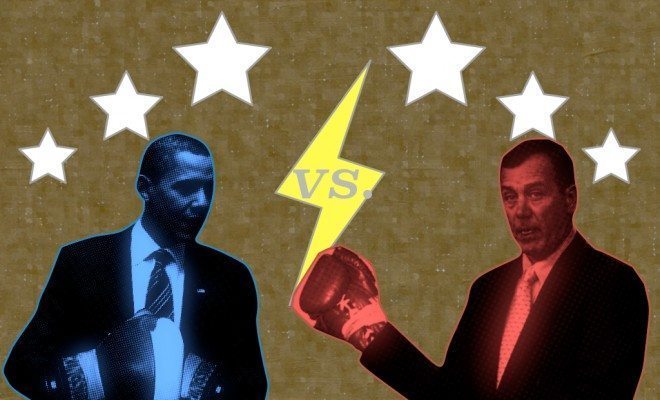 How to Sue Your President, Obama Edition

If anyone believes that the President of the United States has overstepped his bounds, he or she may sue him. Recently, House Speaker John Boehner threatened to do just that. He announced that he plans to urge the House of Representatives to sue President Obama for multiple abuses of executive power.

Like any citizen of the United States, the president can be brought to court. The last time this happened successfully, Senator Edward Kennedy sued President Nixon in 1976 over his abuse of the “pocket veto.” According to Boehner, “the constitution makes it clear that the president’s job is to faithfully execute the laws and in my view the President has not faithfully executed the laws.” How exactly will the process go, should he choose to act?

Though touted in the media as a battle between Obama and Boehner, it would actually be the entire House of Representatives acting as the plaintiff in the lawsuit. Boehner is simply spearheading the legal action by calling on members of the House to bring the case against the president. Boehner plans to bring a bill to the House floor this month to authorize the lawsuit.

This is not the first time a political body has tried to sue a president. In 2011, an independent group of legislators challenged the authority of the president to allow the use of U.S. military force during the Libyan conflict.The case was dismissed by the D.C. Circuit Court due to the plaintiff’s inability to establish standing.

Suing a president differs from impeachment, which is the complete removal of the executive from office, and censure, which is a congressional procedure for punishing the president that has no explicit basis in the federal constitution.

How Can I Sue the President?

1. State Your Grievances: The first step in suing Obama, or any president, is to allege his misuse of power. Doing so is simple — you simply need to state your grievances with his actions. Boehner has already completed this step. Among his complaints, Boehner contends that Obama abused his powers on healthcare issues, specifically changing the “fixed” deadlines in the healthcare law. He also mentioned in a memo to congress that Obama overstepped his bounds in matters of energy, foreign policy, and education.

During his time in office, President Obama has used his constitutional powers to circumvent congress and put a number of laws into effect via executive order. Executive orders are legally binding decisions passed down by the U.S. president that bypass the typical order of passing through both legislative bodies. For example, he required the Department of Labor to allow same-sex couples the right to family leave. Obama also went around congress to raise the minimum wage for federal contractors.

2. Involve BLAG: The second step in the process to sue the president is the involvement of the Bipartisan Legal Advisory Group. BLAG is a body of the U.S. House of Representatives comprised of five members of the House, the speaker, the majority and minority leaders, and the majority and minority whips. The group was enacted by Congress under President Clinton in 1993. BLAG is authorized to guide the office of the House General Counsel to take legal action on behalf of the House of Representatives. As stated by the rules of the House, “the Bipartisan Legal Advisory Group continues to speak for, and articulate the institutional position of, the House in all litigation matters in which it appears.”

3. Establish Legal Standing: Step three to sue the president is to establish legal standing in court. To do so, the plaintiff, in this case the House of Representatives, would need to show that they have incurred “injury” as a result of Obama overstepping his boundaries set by the Constitution.

4. Argue Your Case: The final step in the process is for the plaintiff to actually argue the case against the president. If Boehner successfully establishes standing, the House will be permitted to begin expressing its grievances at the trial court level. Whoever loses the case at that level would likely appeal to the D.C. Circuit Court, followed by the Supreme Court of the United States.

So, does Boehner have a chance to successfully sue Obama? Many believe that Boehner’s threat to sue is, as Obama labeled it, a “stunt” simply intended to cause further political divide and steal the spotlight from the lack of legislation that congress has passed lately. Political analysts believe that other governmental bodies will be wary of involvement to prevent deepening divides among parties.

Frank Anechiarico, professor of law and government at Hamilton College, told ABC, “Even the conservatives on the Supreme Court — particularly Scalia — are reluctant to get in the middle of a political fight between the president and the Congress, unless the stakes are much higher than anything currently detectable. But all it takes is for one district judge to rule otherwise and we’re off and running.”

It’s very weird for the speaker of the house to suggest something like this. That said, if the speaker feels the president has violated the constitutional order of powers in a way that has harmed the house, he may feel he needs to sue.

– John Hudak, fellow in governance studies at the Brookings Institution

As taxpayers would be the ones covering the legal fees, many believe that citizens of the United States would not be supportive of the legal action Boehner wishes to take. Suing the President of the United States is no easy task, and only time will tell if Boehner’s plan to sue Obama over his “king-like” actions will come to fruition.

Marisa Mostek
Marisa Mostek loves globetrotting and writing, so she is living the dream by writing while living abroad in Japan and working as an English teacher. Marisa received her undergraduate degree from the University of Colorado in Boulder and a certificate in journalism from UCLA. Contact Marisa at staff@LawStreetMedia.com.
Share:
Related ItemsCongressImpeachmentJohn BoehnerLawsuitPoliticsPresidentSpeaker of the HouseSuing ObamaWashington