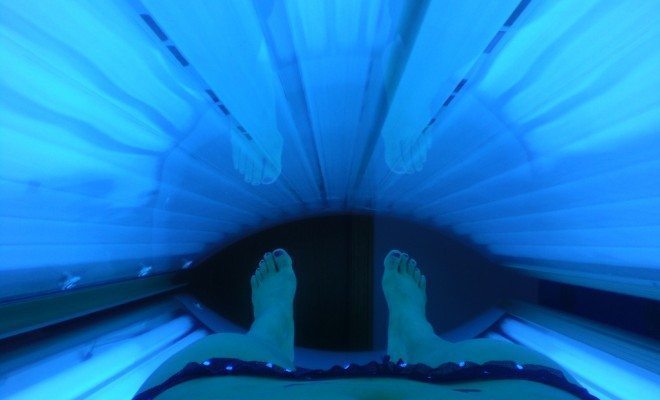 States Saying No to Teen Tanning

It seems as though the fake tanning trend is finally nearing its expiration date. Or at the very least, its legal limits. In recent months, multiple states have moved to restrict the ability of minors to access tanning beds. Teens under 18 in the states that have moved to legislate may need parents’ permission before indulging in the fake-UV rays, or be banned altogether.

Just a few years ago, tanning beds seemed ubiquitous for high school students looking to get a little more orange, despite that the dangers of tanning beds have been well known for years. Laws have always varied, but more states are moving toward banning minors outright, or requiring parental consent for those under 18. The American Cancer Society (ACS) tends to recommend the latter, highlighting the danger of tanning beds for young people. ACS South Dakota’s grassroots manager Carmyn Egge recently pointed out, “what we have found is that a person under the age of 35, who uses an indoor tanning device, their likelihood of getting a melanoma diagnosis [increases] by 59 percent.” Cindy Caneveri, of the American Cancer Society’s Cancer Action Network has cited similar statistics to the press, explaining:

Melanoma is now the second most common cancer for ages 15 to 29, and most common for ages 25 to 29. Melanoma is cumulative, so if you start out using a tanning bed [in your teens], you’re not seeing cancer until your late 20s.

States that have banned tanning completely for those under 18 include: California, Texas, Vermont, Illinois, Oregon, Nevada, Washington, Minnesota, Hawaii, and Louisiana. Delaware just recently passed a bill as well, although it won’t go into effect until 2015.

While the states above have banned teen tanning outright, some states are settling for restricting the ways in which teens can tan. This summer, a new law went into effect in Pennsylvania making tanning tougher on minors. The Indoor Tanning Regulation Act took place last month, and banned anyone under 16 years old from using a tanning bed. It also required that 17 year olds have parental consent. A recently passed Missouri law is also cracking down on the ways in which teenagers can tan indoors. The state now requires that anyone under the age of 17 provide written permission from a parent before using tanning facilities.

The Indoor Tanning Association disagrees with the bans on younger people, pointing out that 16 year olds can drive, own guns, and in certain cases get married, so they should not be limited in their choices to engage in indoor tanning.

The laws, however, do make a lot of sense. Tanning can be a harmful alteration to your body, and it’s logical to leave the ability to consent up to adults. Cigarettes, for example, are illegal until an individual turns 18 and is no longer a minor. Skin cancer is actually more frequent at this point than lung cancer. Each year in the United States, approximately 420,000 new cases of skin cancer are diagnosed that can be traced back to indoor tanning. In comparison, a total of about 225,000 new lung cancer diagnoses were expected in the U.S. in 2014. While cigarettes and tanning beds carry very different types of carcinogens, the move toward restricting harmful activities for those underage is a traditional practice.

Anneliese Mahoney
Anneliese Mahoney is Managing Editor at Law Street and a Connecticut transplant to Washington D.C. She has a Bachelor’s degree in International Affairs from the George Washington University, and a passion for law, politics, and social issues. Contact Anneliese at amahoney@LawStreetMedia.com.
Share:
Related ItemsAmerican Cancer SocietyCancerCarcinogensCigarettesIndoor Tanning AssociationLawsLung CancerMelanomaRegulationsSmokingStatesTanningTanning SalonsTeen TanningTeens