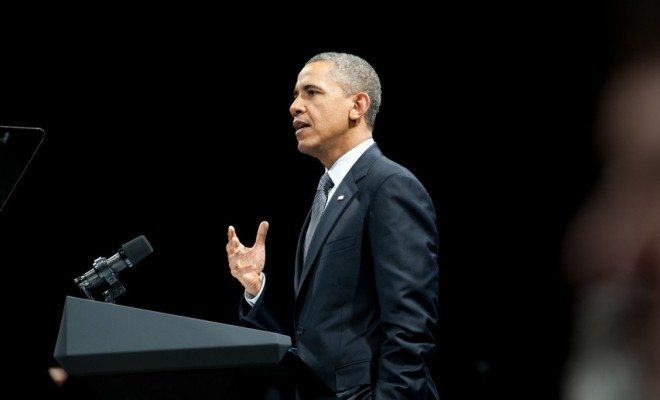 SOTU All About the Middle Class, But Who Exactly is That?

President Obama gave his second-to-last State of the Union address last night, and it’s being lauded as a great one. He laid out a long to-do list, including addressing net neutrality, his education plan, a minimum wage hike, a tax code overhaul, and a fight against ISIS, despite the fact that he enters this year having to stand against a Republican-controlled Congress. In fact, much of the speech seemed like a challenge to a Congress made up of the very people who have consistently tried to stall Obama’s polices for the last seven years. Whether or not they decide to play nice will be up to the Republicans.

You know, I was disappointed. I was disappointed that I didn’t hear more from the president as far as how we were going to help those middle-class families. I thought he painted a little rosy picture of how things are, at a time when people continue to see their wages actually shrink, take-home pay shrinking. Job opportunities are not enough.

That quote from McMorris Rodgers is pretty consistent with a lot of GOP responses to Obama’s SOTU speech last night–that he doesn’t understand the middle class and do enough to help the citizens who fall into that bracket. Most Democrats are insisting that the plans that Obama laid out–particularly those to give middle class families a tax break, as well as help ease the burden of college payments, are going to be great for these segment of the country.

As I sat here trying to work my way through all of the plans, all of the political rhetoric, all of the buzzwords that got thrown around last night, I had a realization. It’s not just that Democrats and Republicans can’t seem to agree on how to help the middle class. It might be that we can’t agree on what the “middle class” is.

The concept of the middle class has long been hailed as a bedrock of American society, and I’m not saying that’s a bad thing. But I think it does make it incredibly difficult to design policies for the “middle class” because when you’re talking about well over half the population, one size doesn’t even fit most. What I, as a 20-something living in Washington D.C., need, is significantly different than what a family in Iowa needs, which is different than someone about to retire in California needs, even if we all make about the same amount and identify as “middle class.”

To bring this back to last night’s speech, it’s that very definition problem that makes it easy for both the Democrats and the Republicans to point to their plans and say “look, it’s for the middle class.” For example, Obama’s statement last night:

That’s why this Congress still needs to pass a law that makes sure a woman is paid the same as a man for doing the same work. Really. It’s 2015. It’s time.

To me, that sounds like a tangible thing that would help the middle class. Given that it’s now pretty close to the norm for both men and women, even those married and/or with families, to work, ensuring that they both get fair pay seems like it would help the middle class to me. But then the Republicans see that Obama is also proposing a tax hike on the richest Americans, and will argue that that’s going to slow job growth, so paying men and women equally isn’t helpful if neither of them can find a job. It’s a messy, cyclical argument that’s more about politics than actually trying to help the middle class, no matter who we may be. And that’s a shame.

Anneliese Mahoney
Anneliese Mahoney is Managing Editor at Law Street and a Connecticut transplant to Washington D.C. She has a Bachelor’s degree in International Affairs from the George Washington University, and a passion for law, politics, and social issues. Contact Anneliese at amahoney@LawStreetMedia.com.
Share:
Related ItemsBarack ObamaDemocratsEqual PayGOPMiddle ClassObamaRepublicansSOTUTaxes