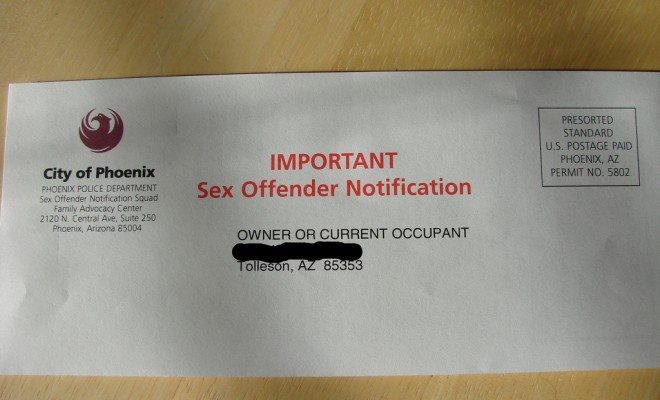 One of the biggest issues with sex offender registries is that they are not consistent from state-to-state. All of them contain the obvious crimes–rape, pedophilia, and the like, but laws differ when it comes to other crimes that fall into more gray areas. For example, over half the states have laws that allow teenagers to be put on sex offender registries if they have consensual sex with another teenager.

Statutory rape laws, when applied to teenagers, operate on sliding scales. Each state has slightly different laws, but they all operate under the same principle: there is leeway for teenagers of the same age who have sex, but as they get further apart in age, the legality vanishes. Here’s an example: in my home state of Connecticut, it would be legal for two sixteen-year-olds to engage in sexual intercourse. It would be illegal for a 14-year-old and a 17-year-old to do the same.

Of course, the argument can be made that those three years do mark important differences in maturity. That’s fair, and I’m not attempting to say that there aren’t many cases in which abuse does occur. These laws do protect that from happening, and even if just one victim is saved, the laws are doing their jobs. But, violating these laws could land that 17-year-old on the sex offender registry, and that’s where I see a problem. A 17-year-old who has sex with a 14-year-old made a bad choice, and broke the law, but he or she does not necessarily deserve to pay that price for the rest of their life.

That exact scenario has happened before– this week Slate published the story of a man named Virgil McCranie who slept with his 14-year-old girlfriend Misty shortly after turning 18. He has since married Misty and started a family with her, but he had had to register as a sex offender to avoid jail time. Because of the laws in his state, he can’t attend his kids’ sports games or dance recitals. He’s lost jobs, money, and opportunities. That doesn’t really seem like justice–it seems like unnecessary punishment.

Consensual sex between teenagers isn’t the only crime that can land you on that list–urinating in public can in certain states. Again, that’s a crime, but the question I want to pose here is, does the punishment match the crime? I’m not so sure.

Inconsistency isn’t the only problem with sex offender lists. They also have the potential to be outdated and inaccurate. Recently it was discovered in Vermont that over 10% of the entries on their sex offender registries were inaccurate in some way. That’s hugely problematic–especially when the presence of a name on a sex offender registry can so seriously affect someone’s life when it comes to job opportunities, purchasing houses, and being a part of the community.

There’s also the issue of how sex offender registries fit into the idea of our justice system. In some ways, our justice system is centered on rehabilitation. Putting people on “lists” to warn the public around them directly contradicts the goal of rehabilitation. Criminal records are of course always affect an individual’s job prospects. But the voyeuristic nature of the sex offender lists make them even more difficult to overcome. As one mother of a young man on a list pointed out:

Several years ago, my son made some really bad choices. He was 22. The girl was 16. He would be placed on the sex offender registry for the rest of his life. He would never be able to serve his time and move on with his life, like any other offender.

She’s right–this can really ruin an offenders life, and not always deservedly so. The blanket treatment that occurs with sex offender registries is problematic–cases deserve to be reviewed on an ad hoc basis. Recognizing rehabilitation is important, and its time that we see that in some of these cases, the punishment simply does not fit the time.

Anneliese Mahoney
Anneliese Mahoney is Managing Editor at Law Street and a Connecticut transplant to Washington D.C. She has a Bachelor’s degree in International Affairs from the George Washington University, and a passion for law, politics, and social issues. Contact Anneliese at amahoney@LawStreetMedia.com.
Share:
Related ItemsPedophiliaRapeSex Offender LawsSex Offender RegistriesSex OffendersVermont