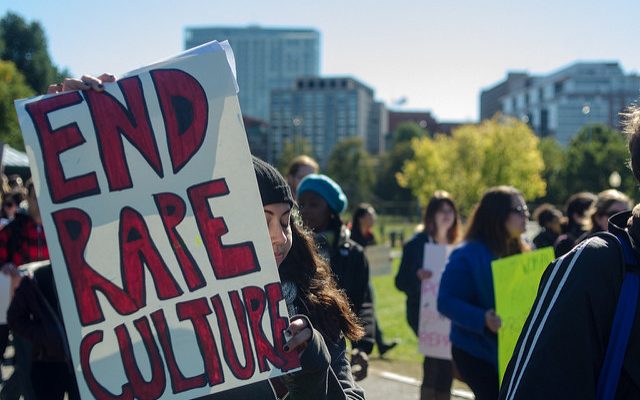 Under current North Carolina law, women cannot withdraw their consent after beginning to have sexual intercourse with a partner or partners.

In a 1979 ruling, the North Carolina Supreme Court held that “if the actual penetration is accomplished with the woman’s consent, the accused is not guilty of rape, although he may be guilty of another crime because of his subsequent actions.” In other words, if a woman begins having sex with someone and decides that she wants to stop, any action after that woman stops consenting is not considered rape under North Carolina law.

Per the 1979 ruling, consent can only be withdrawn, but not once an instance of sexual activity is ongoing. This has affected survivors who have tried to have their alleged rapists charged with rape but were unable to do so because of the court’s ruling. Many states adhere to similar legal principles as those reflected in North Carolina law.

North Carolina State Senator Jeff Jackson introduced a bill in March to the North Carolina General Assembly to address that legal loophole. If passed, the bill would “provide that a person who continues to engage in intercourse after consent is withdrawn is deemed to have committed the act of intercourse by force and against the will of the other person,” regardless of whether the parties had had sex previously or the situation in question was their first encounter.

While well-meaning, the bill does have its fair share of shortcomings. Although the bill is meant to correct the current law’s faults in regard to rape and women’s ability to consent, the bill is narrowly tailored to vaginal intercourse. The bill makes no mention of other forms of intercourse or people who do not have vaginas.

The bill also outlines that “the withdrawal of consent must be clearly communicated in a way that a reasonable person would understand to constitute withdrawal of consent.” This idea still puts the responsibility on the person withdrawing consent, whereas consent should be a continuous conversation among all people involved. After all, consent is not the absence of a “no,” but rather a clear, ongoing, mutual, and uncoerced “yes.”

It is unclear yet whether the bill has any hope of passing. Jackson failed to pass a similar bill last legislative session, and the current bill is still stuck in North Carolina’s Senate’s Rules Committee. However, the bill could have the potential to address some very real issues with North Carolina’s rape laws and bring justice to any future survivors of rape.

Marcus Dieterle
Marcus is an editorial intern at Law Street. He is a rising senior at Towson University where he is double majoring in mass communication (with a concentration in journalism and new media) and political science. When he isn’t in the newsroom, you can probably find him reading on the train, practicing his Portuguese, or eating too much pasta. Contact Marcus at Staff@LawStreetMedia.com.
Share:
Related ItemsConsentJeff JacksonNorth CarolinaRape