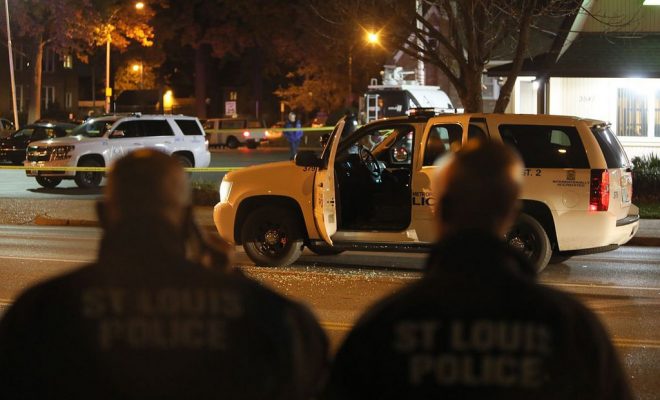 Police Chief on Detective Who Was Killed Sunday: “The Uniform Was the Target”

On Sunday, in four cities across the country, four police officers were shot; one died, and three others were wounded. In a press conference on Monday, the San Antonio police chief addressed the motive of the man who shot and killed a detective on his force, Benjamin Marconi: “I feel we were targeted,” said the police chief, William McManus. “I think the uniform was the target, and the first person who happened along was the target.”

Otis Tyrone McCain, 31, shot Marconi at point blank range as he was in his cruiser writing a traffic ticket on Sunday afternoon in San Antonio. As McCain was being escorted out of the police department after being arrested, he offered an explanation of why he killed Marconi: “Society not allowing me to see my son…I’ve been through several custody battles and I was upset at the situation I was in,” he said, saying he “lashed out at somebody who didn’t deserve it.” He added: “I’m sorry.”

Marconi, 50, was the 58th officer killed in 2016, which is on pace to be the deadliest year for officers since 2011. According to the non-profit group Officer Down Memorial Page, 1973 saw the most officers killed, with 144 officers killed while on duty. A number of police killings of unarmed citizens this year has sparked protests, outrage, and demands for reform. According to The Washington Post’s police shooting database, cops have shot and killed 844 people this year so far, including 16 unarmed African-Americans. For more information on officer deaths in the line of duty, check out Law Street’s Police in America coverage.

Sunday’s shootings, three of which were drive-by attacks, underscore the tense mood between officers and the communities they police. From Philando Castile in Minnesota to the ambush on police in Dallas, this year has seen a number of high profile police killings of unarmed black men, and of retaliation attacks on police.

On Monday, during his press conference addressing the killing of Marconi, who was on the force for 20 years, McManus, the San Antonio police chief said: “He was a great guy, a great investigator. He was just a solid guy and I can’t describe the loss to the police department and the community.”