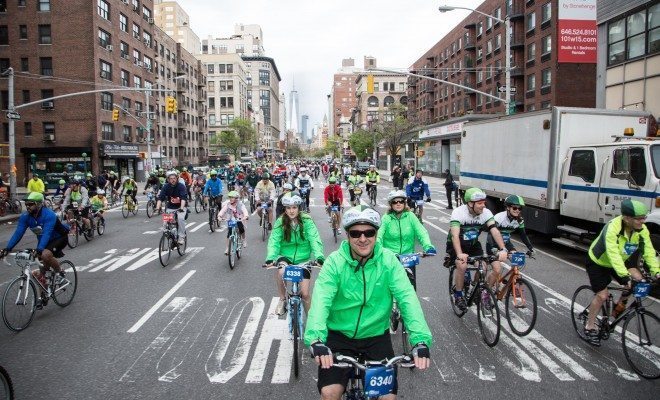 The world’s biggest charitable bike ride will be taking over the streets of New York City for the thirty-eighth time on May 3, 2015. The TD Five Boro Bike Tour, run by the non-profit organization Bike New York, attracts 32,000 cyclists from across the globe to its major annual event. Participants experience all five boroughs of the city on a beautiful 40-mile, car-free ride, all united in the name of charity. Teams raise money and awareness for more than 60 partner charities and causes.

Team Partnership With Children is participating in the TD Five Boro Bike Tour this year with a mission; riding to help New York City school children succeed academically and emotionally by providing comprehensive, on-site counseling services at K-12 schools throughout the city.

Partnership With Children (PWC) is a New York City-based organization that provides support and resources to students and schools to combat the stress that children growing up in poverty may experience. PWC has a long tradition of helping New York City’s children overcome the severe and chronic stress of growing up in poverty, and the organization works with over 17,000 public school students to ensure that they arrive at school each day ready to learn.

The money raised by Team Partnership With Children at the TD Five Boro Bike Tour will not only help to further that goal, but will also support Bike New York’s mission. Given the focus on improving the lives of everyday New Yorkers–particularly children–the partnership between these effective organizations is a natural fit. Click here to support Team Partnership With Children in the TD Five Boro Bike Tour.

While it’s certainly grown over the years, the TD Five Boro Bike Tour isn’t a new event by any means. It began as part of an effort to teach New York’s youth about the benefits of cycling and bicycle safety. The program ended with a ride around the five boroughs in an attempt to explore the urban landscape in a new way. The program was a success, and as New York became more bike friendly, it continued to grow. Now the event is capped at 32,000 participants and welcomes riders from all over the country and the world. True to its name, the route does involve going through all five boroughs, and includes rides through Central Park and over the Pulaski Bridge. In order to further guarantee the safety of all its riders, the tour now involves blocking off the route so the riders can ride freely and without the fear of cars. Mayor Bill de Blasio praised the event, saying:

New York is at the forefront of making streets safe and accessible for all pedestrians, drivers, and cyclists…More and more New Yorkers are utilizing bikes for transportation and recreation, and Bike New York has been an important ally in teaching cyclists of all ages and skill levels the fundamentals of biking in urban environments and how to ride with confidence and greater regard for street safety.

The money raised for Bike New York during the Tour goes to benefit the lessons and programs that it provides to 16,000 New Yorkers annually. As Bike New York puts it, the event is an opportunity “for the global cycling community to come together to grab life by the handlebars and ride for a reason.”

The President and CEO of Bike New York, Ken Podziba, explained the motivation for the event, stating:

Since the first Tour in 1977, we’ve been reminding the world that the streets are public spaces. Bikes are as welcome and deserving of a place on the blacktop as they are on the greenways, and we’re empowering New Yorkers with that knowledge and the know-how to put it to use and rediscover their rights and their City.

The TD Five Boro Bike Tour is a great opportunity for charity partners like Partnership with Children to unite around a common goal, and promises to be a day of fun for all the riders and supporters who participate. If you’re interested in cheering on the teams or signing up to participate in next year’s event, check out the information here. To support Team Partnership With Children and its critical mission of ensuring that all of New York’s at-risk youth succeed in the classroom and beyond, visit the team page here.