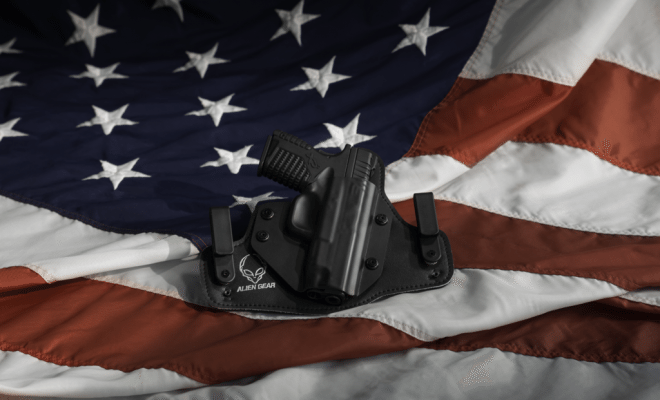 On the internet, everyone can have an opinion. The idea behind Change.org is that if enough people share an opinion, the powers that be will listen and accommodate their requests. Some petitions are superficial, like this one demanding that Instagram present photos chronologically. Some are touching, such as this one by the mother of a murder victim asking that the killer not receive a death sentence. One petition that has been getting attention recently is a petition for the Republican convention in Cleveland—an event with the potential to incite riots—to be an open carry zone for firearms.

Ohio is already an open carry state, but Quicken Loans Arena, the venue for the RNC convention, forbids firearms inside the premises. The petition explains in no uncertain terms how dire the need for firearms at the convention truly is. The author, a man named Len Davies refers to Quicken Loans Arena’s policy as “a direct affront to the Second Amendment,” arguing that it puts “all attendees at risk.” Davies even quotes the NRA as saying, “gun free zones… tell every insane killer in America… [the] safest place to inflict maximum mayhem with minimum risk.”

If the petition comes to pass, the GOP candidates (as well as the managers of Quicken Loans Arena) will have a tricky decision on their hands. From one point of view, open carry is a no-brainer because all three republican candidates have voiced their disapproval of gun-free zones. The petition cites several quotes from each candidate: Donald Trump has called multiple times for the expansion of open carry areas, saying “you know what a gun-free zone is to a sicko? That’s bait.” Ted Cruz has said “look, if you’re a lunatic ain’t nothing better then having a bunch of targets you know that are going to be unarmed.” John Kasich worked to end “gun-free zones” at National Guard facilities in Ohio.

While the decision would ultimately come down to the venue’s management, candidates and figureheads of the RNC will be encouraged to respond to this petition. Supporting open carry at an event like this one could be a very dangerous move, but denying open carry could be seen as a violation of second amendment rights. If a candidate supports open carry in their state, that should mean they see it as a safe choice and would have no issue following the same rules at an RNC event. The petition decries the “hypocritical act of selecting a ‘gun-free zone’ for the convention.”

Some of the petition’s supporters may have ulterior motives, however. Many tweets and Facebook posts seem to indicate that the petition’s proponents aren’t quite friends of the RNC and are sending a tongue-in-cheek request for mayhem and chaos at the Cleveland convention. It’s also likely the petition’s author isn’t a ‘true conservative,’ as some elements of his petition read so strongly that they may be a parody. Davies capitalizes “HUSSEIN” in Barack Obama’s full name, and refers to ISIS using Dubya’s favorite phrase—”evil-doers.”

These petitions do occasionally enact real change but are often just digital wishful thinking. Don’t hold your breath for Cleveland to become the ‘wild wild (Mid)West’ just yet. Expect this petition to make some buzz, especially if it reaches its goal for petitioners. If you believe in the cause, add your name, and if you don’t, add your name just to add fuel to the fire. In all likelihood, nothing will change. Today, the Secret Service announced unequivocally that there will be no guns at the RNC convention, but it never hurts to try.