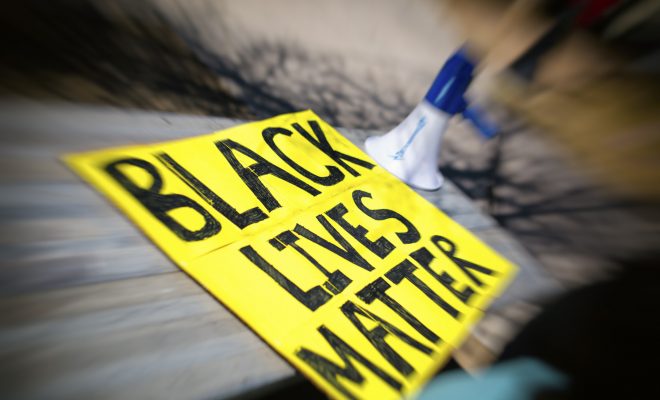 Footage from a dashboard camera and a body camera on one of the police officers involved in the shooting of Keith Scott in Charlotte last week have finally been released. It turns out the one officer who wore a camera didn’t turn it on until after Scott was already on the ground.

Two videos were released late Saturday after mounting pressure and some violent protests that left people wounded and one dead. The footage from the dashboard camera shows a plainclothes officer aiming his gun at a car. The officer in the car with the dash cam gets out and joins him. Then Scott is seen exiting his car and backing away, and the officer without a uniform fires four shots. Since the video is from inside the police car, there is no audio to prove what was said. But it’s clear that Scott did not aim any gun at the officers at that point.

The body camera footage is grainy and jumpy and shows an officer standing behind Scott’s car, as the officer wearing the camera comes up and knocks on the window with his baton. Scott is then seen getting out from the car but disappears from the video. Next time he’s in the picture, he’s on the ground. The sound on the camera is not turned on until this point, which is why it’s unclear what happened and who said what. It’s also impossible to see from that footage whether Scott had a gun or not. When the sound is turned on, the officers are heard yelling “handcuffs, handcuffs” and asking each other whether they are okay, while Scott is moaning and lying on the ground dying.

Charlotte was the first major city in North Carolina to start using body cams for officers in 2015. The cameras are always on, but they don’t save the footage until the officer presses a button to activate it. That’s when the audio sets in, and it also automatically saves the last 30 seconds of video from before that.

According to protocol, all patrol officers should wear a camera and must activate it as soon as they anticipate any interactions with civilians. But the officers who first approached Scott were wearing plain clothes and therefore did not have any cameras. They claim they realized Scott had a gun, so they retreated to put on police vests and wait for a uniformed officer. That officer was wearing his camera, but he waited to activate it until after Scott was shot.

This news upset many.

Yet another example of why body cameras are not the way to end police shootings. Sometimes, cops don’t turn them on. https://t.co/Q1jNRKYYkU

But this might be the last footage you see from a police shooting in North Carolina. A new law goes into effect on October 1 that will prevent the public from obtaining footage from body or dashboard cameras. According to Governor Pat McCrory it’s about: “respecting the public, respecting the family, and also respecting the constitutional rights of the officer.”

Under the new law, police videos like the ones in Scott’s case would no longer be considered public record.

The day before the footage was released, Scott’s wife published her own video of what happened, in which the officers are heard yelling “drop the gun” to Scott inside his car. She repeatedly says, “he doesn’t have a gun,” and also points out that he has a traumatic brain injury and just took his medicine. In the video she begs the officers not to shoot her husband, right up until they shoot him.

The attorney for the Scott family, Justin Bamberg, argued that the officer not activating his camera is both a violation of department policy and also meant there was little evidence to show what had actually happened. He said:

Information that we could have had is forever gone because of this officer’s failure to follow department policy and procedures. Those policies exist for a reason, and there is a reason the CMPD equips its officers with body cameras–because body cameras provide visual evidence so that when tragic things do happen we don’t have to question exactly what happened.

Emma Von Zeipel
Emma Von Zeipel is a staff writer at Law Street Media. She is originally from one of the islands of Stockholm, Sweden. After working for Democratic Voice of Burma in Thailand, she ended up in New York City. She has a BA in journalism from Stockholm University and is passionate about human rights, good books, horses, and European chocolate. Contact Emma at EVonZeipel@LawStreetMedia.com.
Share:
Related ItemsBlack Lives MatterBLMBody CamBody CameraCharlotteDashboard CameraGun ViolenceGunsKeith Lamont ScottKeith ScottNorth CarolinaPolice ShootingsPolice ViolenceTransparency