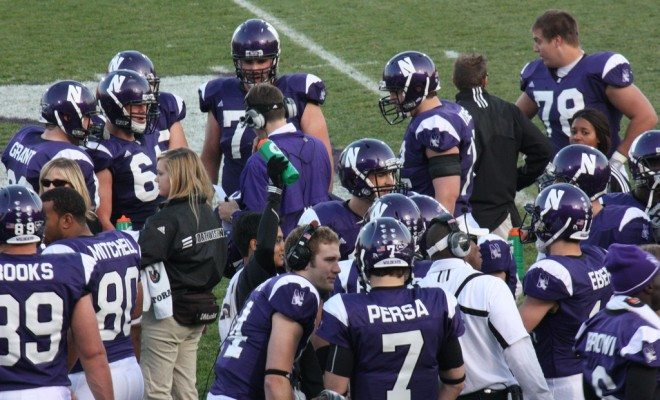 The relationship between student athletes and the schools for which they play has operated increasingly in a gray area in recent years. Student athletes are technically students, but in many ways–particularly when it comes to the money they generate for their schools–their relationships to the colleges and universities are significantly different from non-student athletes. In recognition of the ambiguity of this gray area, and the desire to contribute to discussions about their program, football players at Northwestern University recently tried to unionize. After a long back-and-forth, their application was effectively turned down by the National Labor Relations Board (NLRB), meaning the players cannot unionize.

The argument made by the students looking to unionize was based on something that is pretty well known for permeating college sports–money. Universities can make a hefty chunk of change from having strong college sports teams, particularly football. According to the Department of Education, college football revenue generated by Division 1 teams topped $3.4 billion in 2013. For comparison, that number wasn’t too far from the $3.6 billion in revenue generated by the National Hockey League (NHL) in 2013.

But a team is only as good as its players, and while players do receive plenty from the arrangement in the form of publicity, experience, and sometimes a straight shot to the big leagues, the Northwestern football players were arguing that they deserve a more prominent seat at the table. Kain Colter, a former co-captain of Northwestern’s team, explained that being a football player at the school was essentially a job. CNN summed his testimony at the NLRB hearing to that effect:

He said football was dominating his college experience, consuming up to 60 hours a week during the season and up to 20 hours the rest of the year, he said. He and his teammates never got summer and winter breaks, couldn’t schedule certain classes and were required to adhere to dozens of rules or risk losing their scholarships.

As a result of that environment, Colter and the other Northwestern players who voted to unionize, as well as players from other schools involved in the movement, argued that they would like to receive benefits like free tuition or more extensive medical coverage.

However, that particular argument wasn’t convincing for the NLRB board, which denied to take jurisdiction over the application to unionize. By doing so, the board essentially stopped the students’ ability to join or create a union. Northwestern University brought up that its student-athletes are students first, not employees, an important distinction if the players were to unionize. Additionally, officials from the school expressed confusion as to why Northwestern was the focus of this push, given that Northwestern isn’t generally regarded as a football powerhouse. Additionally, a big concern for the board appeared to be that it would create an unfair advantage for students who attend private universities, because the ruling wouldn’t apply to students at public universities.

The Northwestern players’ attempts to form a union have been pretty much quashed, but that doesn’t mean the conversation is over. Players at public universities could try their luck with various state institutions. Additionally some of the things that the players are fighting for, like improved medical care, are consistent with broader discussions in the football community and the NFL about player safety. As the line between student-athlete and athlete continue to blur, and college football promises to continuing growing, these are essential issues that schools will have to contend with.

Anneliese Mahoney
Anneliese Mahoney is Managing Editor at Law Street and a Connecticut transplant to Washington D.C. She has a Bachelor’s degree in International Affairs from the George Washington University, and a passion for law, politics, and social issues. Contact Anneliese at amahoney@LawStreetMedia.com.
Share:
Related ItemsCollege FootballFootballNCAANLRBNorthwesternNorthwestern UniversityStudent AthletesUnionizationUnions