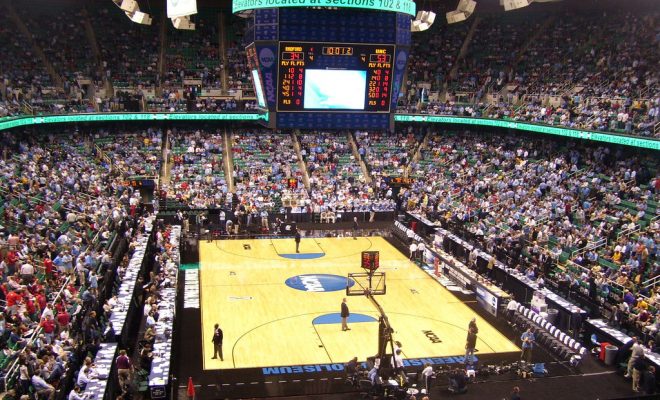 Right in the middle of March Madness, the NCAA has taken another stance against North Carolina’s HB2 law. In a statement released through Twitter by the association on Friday, which coincided with the one-year anniversary of HB2’s passage, the NCAA offered somewhat of an ultimatum and stated that, if North Carolina does not make changes or repeal its controversial transgender bathroom law, it will exclude the state from its process for deciding where to locate its championship games from 2018 to 2022.

This is not the first time the NCAA has taken action against North Carolina in response to HB2. Last fall, the NCAA pulled its seven planned championship tournament games out of North Carolina because of the association’s “commitment to fairness and inclusion.” This move has taken on brand new significance recently as Duke was knocked out of the second round of the NCAA championship after losing to South Carolina in a game that was originally slated to be played in Greensboro, North Carolina but was moved to Greenville, South Carolina. Many saw the game’s location as a factor in Duke’s performance. In a post-game interview, Duke Coach Mike Kryzewski said in response to whether he was frustrated about the game’s location that if he were president or governor, he would “get rid of it.”

North Carolina Gov. Roy Cooper tweeted out a statement Friday calling for the state’s Republican lawmakers to “step up, meet halfway, and repeal HB2.” He also called March 24 a “dark anniversary” for the state, referring to the one-year anniversary of the law’s passage.

According to Forbes, the NCAA tournament has a significant economic impact for host cities, as a diverse set of industries benefit from the massive influx of fans coming to watch games.

The NCAA is not the first sports association to pull its events out of North Carolina. This year’s NBA All-Star weekend was slated to be held in Charlotte, North Carolina; however, in response to HB2, the NBA decided to relocate its All-Star festivities to New Orleans.

HB2 is one of, if not the most, salient topic in North Carolina politics right now, and the political back and forth is beginning to turn heads around the country. However, that is apparently not stopping other state legislatures from drafting HB2-type laws, as a transgender bathroom bill in Texas, Senate Bill 6, passed through Texas’s Senate State Affairs Committee and will by voted on by the full Senate. According the The Hill, the law is expected to pass through the full Senate, but will have a shakier path in the House.

HB2 remains deeply unpopular in North Carolina, as a recent poll from Public Policy Polling revealed that 50 percent of those surveyed in the state are opposed to it, and 58 percent of those surveyed think that it’s hurting the state. Things don’t seem to be looking up politically in the state, and repealing HB2 looks like it will be a long, uphill battle, seeing as how on Friday the Republican-controlled North Carolina legislature overrode Gov. Cooper’s first veto as governor.

The NCAA will decide on host cities for its championship games by April 18.

Austin Elias-De Jesus
Austin is an editorial intern at Law Street Media. He is a junior at The George Washington University majoring in Political Communication. You can usually find him reading somewhere. If you can’t find him reading, he’s probably taking a walk. Contact Austin at Staff@Lawstreetmedia.com.
Share:
Related ItemsHB2LGBTQMarch MadnessNCAANorth CarolinaRoy CooperSports