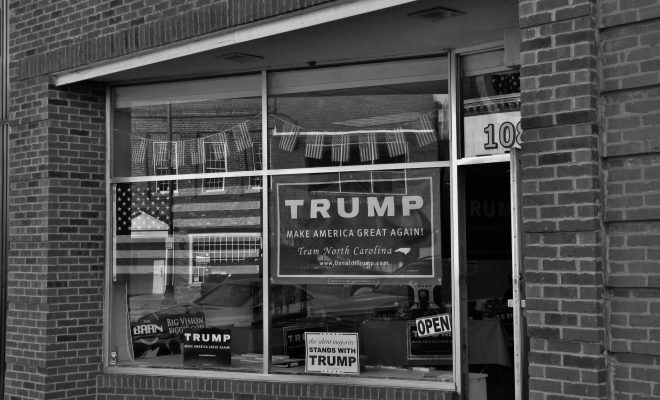 "Not an Endorsement" courtesy of [Gerry Dincher via Flickr]

A GOP office in Hillsborough, North Carolina, was vandalized and later destroyed by an apparent act of arson.

The Orange County Republican headquarters suffered damages caused by a substance thrown through one of the building’s front windows. The flammable material damaged the building’s interior before going out. The firebombing occurred at some point between Saturday night and Sunday morning. Graffiti and threatening words also marked the territory. An adjacent building was graffitied “Nazi Republicans get out of town or else” accompanied by a swastika.  No one was injured.

Hillsborough Mayor Tom Stevens released a statement and reminded people that elections should be an opportunity to become more democratic, rather than moving into acts of violence.

“This highly disturbing act goes far beyond vandalizing property; it willfully threatens our community’s safety via fire, and its hateful message undermines decency, respect and integrity in civic participation,” Stevens said. “I believe I speak for the overwhelming majority of people who make Hillsborough their home: Acts like this have no place in our community. Our law enforcement officials are responding quickly and thoroughly to investigate this reprehensible act and prosecute the perpetrators.”

According to the town, “no damage estimates are available yet, and Hillsborough police are continuing to investigate the incident with the Bureau of Alcohol, Tobacco, Firearms and Explosives.”

Governor of North Carolina Pat McCrory declared he will use every resource as governor to assist local authorities in the investigation. McCrory’s staff helped deliver new campaign materials to Orange County hours after the bombing.

“The firebombing of a local political headquarters in Orange County is clearly an attack on our democracy,” McCrory said in a statement. “Violence has no place in our society – but especially in our elections. … I will use every resource as governor to assist local authorities in this investigation.”

The firebombing of a local political headquarters in Orange County is clearly an attack on our democracy. pic.twitter.com/fr9FWGQUoG

North Carolina is a key battleground swing state and both presidential nominees have visited in order to secure the state’s 15 electoral votes.

Thank you for your thoughts & prayers, Sec. @HillaryClinton.

The North Carolina Republican Party tweeted its appreciation in response. Democrats have raised over $13,000 online to repair the damage. The county is overwhelmingly Democratic. Democrats and independents outnumber Republicans 5-1, according to The Charlotte Observer.

Bryan White
Bryan is an editorial intern at Law Street Media from Stratford, NJ. He is a sophomore at American University, pursuing a Bachelor’s degree in Broadcast Journalism. When he is not reading up on the news, you can find him curled up with an iced chai and a good book. Contact Bryan at BWhite@LawStreetMedia.com.
Share:
Related Items2016 ElectionDonald TrumpGOPHillary ClintonNorth CarolinaPat McCroryRepublican