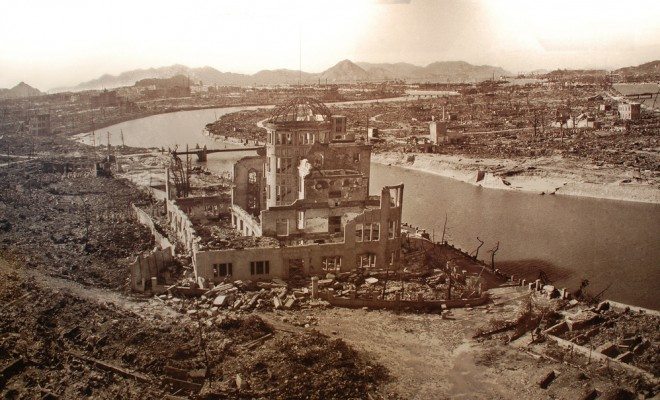 Seventy-one years after the United States dropped an atomic bomb on the city of Hiroshima, Japan, leveling most of the city, killing 80,000 civilians and effectively winning the Pacific War, a sitting U.S. president will visit the city to commemorate the victims and highlight a future free from nuclear weapons.

After weeks of speculation, the White House released a statement yesterday detailing President Barack Obama’s May 21-28 trip to Vietnam and Japan, during which he will make his landmark visit to Hiroshima’s Peace Memorial Park. He will be accompanied by Japanese Prime Minister Shinzo Abe.

Secretary of State John Kerry visited the same site last month, along with U.S. Ambassador to Japan Caroline Kennedy, in a trip that many assumed was a precursor to Obama’s visit. Some commentators criticized Kerry’s trip as an “apology tour,” and though today’s announcement was expected, similar denouncements aimed at the president are likely to be made in the coming days.

White House Press Secretary Josh Earnest defended the trip, which will also include the annual G-7 Summit, assuring doubters that it will not include an apology from Obama, though he did acknowledge the call for a “legitimate line of inquiry.”

But during an era of increased Japanese nationalism, as some experts claim Japan has been experiencing under the leadership of Abe, the visit could be perceived differently from the other side of the Pacific, at least by the Abe government.

In a written post on Medium on Tuesday, White House Deputy National Security Advisor Ben Rhodes sought to assuage doubters and clarify the motivation behind Obama’s visit. “He will not revisit the decision to use the atomic bomb at the end of World War II. Instead, he will offer a forward-looking vision focused on our shared future,” he wrote, adding that the visit will “symbolize how far the United States and Japan have come in building a deep and abiding alliance based on mutual interests, shared values, and an enduring spirit of friendship between our peoples.”

But it’s also important to note the trip holds different significance for other American politicians. For Donald Trump, the presumptive Republican presidential nominee, a nuclear Japan might be necessary to combat a threat from North Korea. So as Obama looks to shine a light on the atrocities caused by nuclear weapons and look toward a world free of their destructive power, his potential successor could be in favor of proliferation.

Alec Siegel
Alec Siegel is a staff writer at Law Street Media. When he’s not working at Law Street he’s either cooking a mediocre tofu dish or enjoying a run in the woods. His passions include: gooey chocolate chips, black coffee, mountains, the Animal Kingdom in general, and John Lennon. Baklava is his achilles heel. Contact Alec at ASiegel@LawStreetMedia.com.
Share:
Related ItemsBombHiroshimaJapanObamaShinzo AbeWhite HouseWorld War II