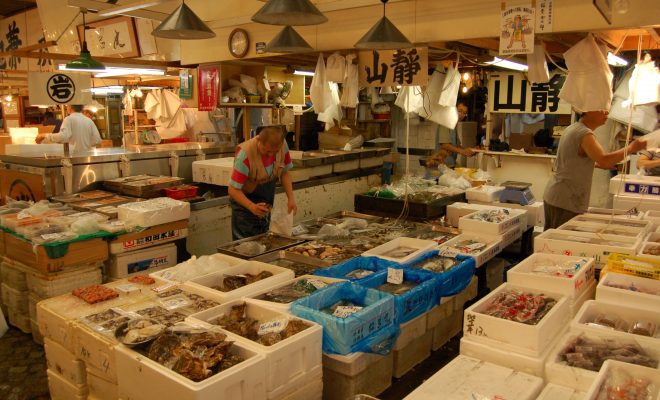 Tourism and Toxicity at the Tsukiji Fish Market

Japan’s largest fish market, Tsukiji, caught fire last week in a blaze that burned for 15 hours, destroying massive portions of the historic building that has housed the market for decades. No one was injured in the fire but the cause is still unknown. The fire will not shut down the market, which has been a popular tourist destination since it opened in 1935, but it has brought international attention to the market–which is facing a dramatic move that few of the tourists visiting its stalls and shops are aware of.

Concerns about the antiquated refrigeration systems in the market and the building’s vulnerability to earthquakes have been present for years but the fast approaching 2020 Olympics accelerated plans to move the market, as Tokyo Governor Yuriko Koike looks to create space for athletic venues and housing during the games. The Tsukiji market was meant to be relocated last year to the man-made island of Toyosu, a location which was not convenient for fishmongers or tourists, but was purpose-built with modern appliances and resources. However, Toyosu was occupied by the Tokyo Gas Company from 1966 to 1988 and industrial chemicals had saturated the area, skyrocketing past legal levels.

Officials claimed that they had sanitized the land but Koike revealed in a press conference last fall that those measures had never in fact taken place–yet she still plans to move the fish market to Toyosu. The local government has invested millions in cleaning up the Toyosu site but it has not yet been declared safe–leaving both the fishmongers who work there and tourists who plan to visit wary. The original site of the Tsukiji market will be rebuilt as a culinary theme park while the traditional fish market will be moved to Toyosu in the summer of 2018. More than 70 percent of the fish wholesalers working in Tsukiji oppose the move but unfortunately the decision is not theirs to make–there is no union, no collective bargaining and even if there was, this is not the type of battle unions are usually designed to negotiate.

Hosting the Olympics is an intensive process for any city–the infrastructure fiasco at Sochi and the massive protests in Rio are just the tip of the iceberg when it comes to exploring all that can go wrong when hosting the international event. Koike faces an almost impossible decision–leave the Tsukiji market where it is, a crumbling building vulnerable to fires and earthquakes, or move it to the new site, where contamination could destroy the health of everyone who sells and shops for fish there. The market can’t be shut down–not only is it a tourist destination, it is the largest fish supplier for the restaurants of Tokyo. In a nation where sushi is sold on every corner, the fish supply cannot be cut off overnight. The fate of the market rests now rests entirely on the shoulders of the clean-up team working to purify Toyosu. If the site is still contaminated next summer, Koike will be back to square one–with the clock ticking closer to the Olympics every day.

Jillian Sequeira
Jillian Sequeira was a member of the College of William and Mary Class of 2016, with a double major in Government and Italian. When she’s not blogging, she’s photographing graffiti around the world and worshiping at the altar of Elon Musk and all things Tesla. Contact Jillian at Staff@LawStreetMedia.com
Share:
Related Items2020 OlympicsFireJapanOlympicsPollutionTourismToxicityTsukiji Fish MarketYuriko Koike