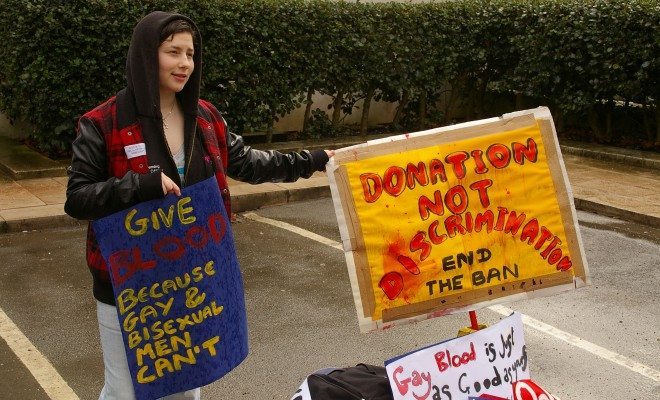 The National Gay Blood Drive: A Call for Change

On Friday, gay and bisexual men participated in the second annual National Gay Blood Drive. The drive’s goal was to call attention to the FDA’s lifetime blood donor deferral for all men who have had sex with another man, in place since 1977. Despite the national attention that it received, the first gay blood drive last summer did little to sway the FDA and the ban remained. Organizations such as the American Red Cross, America’s Blood Centers, and the American Association of Blood Banks have all spoken out in support of easing blood donor restrictions. They say that they all, “believe the current lifetime deferral for men who have had sex with other men should be modified and that donor deferral criteria should be made comparable with criteria for other behaviors that pose an increased risk for transmission of transfusion-transmitted infections.”

But let’s back up a bit here–why is there a restriction preventing gay men from donating blood in the first place? About three decades ago, when the AIDS crisis was in full swing, there was panic about how the HIV virus was transmitted. The restriction was put in place to prevent gay men from transmitting HIV through blood donations. But the times, and our scientific knowledge, have changed. We have had the ability to perform blood tests for nearly 30 years now, and it’s been nearly that long since we’ve had a single case of HIV via blood transfusion. The laws are also a relic of a time when it was thought that HIV was an exclusively homosexual disease–it’s since been proven that it can be passed on to anyone of any sexual orientation. That’s exactly why every sample is tested for many things, including HIV, after it is donated.

Ryan James Yezak, the drive’s organizer, wrote a passionate plea for lifting the ban this week on behalf of the Human Rights Campaign. He explained how three years ago, he wanted to go with his boss to give blood after a natural disaster. In his plea, he explained:

While I was healthy as could be, I could not donate due to the fact that I was gay. I had to explain the situation to everyone in my department. For the first time in my life, I felt like I was being treated differently solely on the basis of my sexual orientation – it felt alienating, it felt wrong, but above all – it felt unnecessary.

Yezak could not be more correct–it is unnecessary. A simple blood test and waiting period eliminates the need to categorize individual donors as a risk. The exclusion of gay and bisexual men from donating blood only propagates a stigma against which gay rights activists have spent the past 30 years fighting.

In fact, the only thing that this ban really does is cut down the number of potential blood donors, which is not something we should be doing. Blood shortages have been a major issue in the United States over the past several years.  According to the American Red Cross, more than 41,000 blood donations are needed every single day. In times of catastrophes and in the summer months when schools are no longer holding blood drives, there are major shortages of blood due to the lack of donors. ABC News reported that last year that the United States faced one of the worst shortages the Red Cross has ever seen. As Yezak explained, “to continue to exclude people despite the entirely reasonable arguments of the organizations that supply blood themselves is both discriminatory to them and harmful to everybody.” He said, “someone needs a blood donation every two seconds in the U.S., and you never know when that someone is going to be you.”

The bottom line is, we should not be turning away anyone’s blood. So long as it has been tested, there is no reason that everyone, regardless of sexual orientation, should be banned from donating. Hopefully the second annual National Gay Blood drive will prompt the FDA to lift this outdated and discriminatory ban.