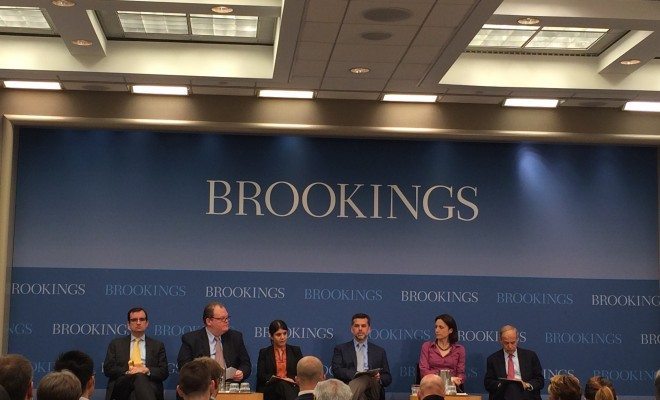 Is There Any Mortar in These BRICS?

Brazil is hosting a major international party today and the United States is not invited. While Brazil, Russia, India, China, and South Africa — also known as the BRICS countries — socialize and chat each other up about world affairs, the U.S. is sitting on the sidelines. But don’t worry — America doesn’t feel left out.

BRICS is the acronym for Brazil, Russia, India, China, and South Africa, countries with prominent global influence and rapidly growing economies. South Africa most recently joined the group in 2010, whereas representatives from the other five began meeting in 2006. Economic experts agree on the importance of these nations’ expanding economies and the roles they will play in the future of global trade and finance.

The BRICS agenda is fascinating, but the issues that will be discussed, according to a panel of experts on the subject hosted by the Brookings Institute last week, are more pertinent to quickly growing global economies, not the already well-established U.S., which is exactly why the country isn’t feeling left out. At least not yet.

Under the glow of fluorescent lights and amid the aroma of free coffee (it always smells better this way, doesn’t it?), the five panelists discussed the upcoming conference in front of an audience ranging from eager youths to seasoned foreign policy experts.

Kenneth G. Lieberthal, an expert on China and author of an impressive 24 books, kicked off the discussion. He, along with the other panelists, explained that the major goal of the nations attending the summit will likely be to establish an alternative to the International Monetary Fund (IMF). In simpler terms, these countries no longer wish to depend solely on the United States and its allies to take care of global financial dealings and monetary crises. The panelists speculated that China’s steady growth as a world power may provoke the other countries in BRICS to downgrade its status as a member of the group because it no longer has the same concerns about which the foundation of the group was based. This parallels the group’s concerns regarding the United States’ domination of world affairs. For now, however, China is still included in the upcoming Brazil summit.

Ken Lieberthal: the BRICS aim to democratize options for emerging markets thru own bank #BRICS2014. Will they succeed? Can they find it?

Each expert panelist represented a country’s specific agenda. Fiona Hill, a frequent commentator on Russian and Eurasian affairs, emphasized the importance of the BRICS summit for Vladimir Putin. After Russia’s recent annexation of Crimea in Ukraine, an action that sparked great disapproval from a number of nations, the country was banished from the G8 summit. Hill thinks that Putin will take advantage of his invitation to the BRICS summit to reestablish Russia’s role as a world power. Hill suggested that nothing concrete will likely come of Russia attending BRICS — the summit is simply a means of “political theater” for Putin.

Tanvi Madan, the expert representative on India, touched on how the country does not agree with the United States’ idea of democracy and identifies more closely with the other countries attending BRICS. More specifically, India holds a long-standing pragmatic relationship with Russia. Madan said the BRICS summit will not affect India’s relationship with the United States. For India, the BRICS summit symbolizes India’s new voice. The summit enables India to express that it wants reform in a variety of institutions including issues, sanctionsm and sovereignty. The BRICS summit offers a way for India to form closer ties with the other countries attending.

Harold Trinkunas, an expert in Latin American politics currently studying Brazil’s emergence as a major power, spoke of Brazil as a key player in the upcoming BRICS summit. Now that the World Cup ended, Brazil passed the torch to Russia for the 2018 Cup and moved on to host the BRICS Summit, which starts today.

Sadly, South Africa was left out of the conversation. As the newest member to the group, it hasn’t yet established its own agenda for the summit. We expect to hear few details about South Africa in comparison to the other member countries.

So, why isn’t the United States concerned about BRICS’ desire to decrease their dependence on Western countries? The panelists agreed that BRICS’ wishes to create an alternative to the International Monetary Fund is not necessarily negative. As noted by Kenneth Lieberthal, the expert on Chinese affairs, the BRICS countries want to create a bank focusing on infrastructure loans. Creating an alternative to the World Bank would increase the capacity for big emerging markets to be less reliant on the United States and Europe. Theoretically, this would allow for greater financial democracy and a more efficient way for countries to solve individual financial crises.

As these alliances grow stronger, we will see if there’s any mortar in the BRICS. The United States isn’t too concerned about any of the potential outcomes from this agenda — but only time will tell.

Natasha Paulmeno
Natasha Paulmeno is an aspiring PR professional studying at the University of Maryland. She is learning to speak Spanish fluently through travel, music, and school. In her spare time she enjoys Bachata music, playing with her dog, and exploring social media trends. Contact Natasha at staff@LawStreetMedia.com.
Share:
Related ItemsBrazilBRICSBRICS SummitChinaDemocracyForeign PolicyIndiaInternational AffairsPutinRussiaSouth Africa