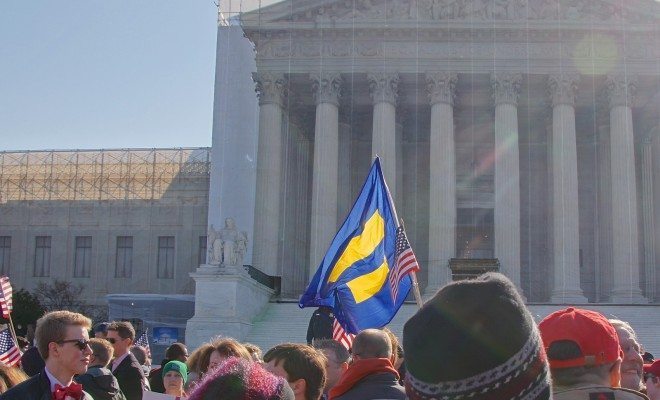 Several LGBT rights groups have withdrawn their support for the Employment Non-Discrimination Act (ENDA), a bill that would ban employers from refusing to hire or discriminating against workers based on their sexual orientation or gender identity. A coalition of groups that support LGBT rights, such as the American Civil Liberties Union (ACLU), Lambda Legal, and the National Center for Lesbian Rights, is leading the charge away from the ENDA. This comes as a surprise, given that ENDA previously had strong support from these same groups. They are pulling support from a bill they have long worked to pass for only one reason–the recent ruling in the Hobby Lobby case. The problem is that they may be overreacting.

Since the ruling was handed down in the Hobby Lobby case, there have been misinterpretations of the case from both sides of the aisle. The liberal side of the debate has rallied behind Justice Ginsburg’s dissent, saying that the “floodgates” have been opened for religious freedom suits. That argument is the reason why so many LGBT groups have removed their support for the ENDA. They fear that corporations who wish to discriminate will be able to sue under the Religious Freedom Restoration Act (RFRA), the same way that Hobby Lobby did. They are scared that the Supreme Court could rule that a religious corporation not being allowed to discriminate on the basis of sexuality is a violation of RFRA. I understand this fear, excellently articulated here by our blogger Chris Copeland, but I think that they are simply overreacting to Justice Ginsburg’s dissent. The ruling itself was very narrow and will likely never serve as a precedent for sexual discrimination.

How am I so sure of this? Let’s put it this way, these suits will almost definitely not happen as long as Justice Anthony Kennedy remains the swing vote on the Supreme Court. Kennedy did vote with the majority on Hobby Lobby, but it is clear from his concurring opinion that his vote came with some serious strings attached. Kennedy implied that he only voted the way he did because of the narrowness of the case. He believed in this specific instance that the least-restrictive means test was not met, and pointed out that the government already allowed exceptions for non-profit corporations. The court’s ruling made it clear that the decision only applies to a religious exception for the contraceptive mandate, and that all other potential religious exceptions must be evaluated individually. Simply put, Hobby Lobby is not an invitation to use the RFRA to allow sexual discrimination.

If a case arguing that job discrimination should be allowed under the RFRA ever made it to the Supreme Court, there is no way Kennedy would vote to allow it. There are several reasons for this. Kennedy wrote the majority opinion in Lawrence v. Texas, a case that ruled any law prohibiting sexual acts between members of the same sex in private was unconstitutional. He also authored the opinion in United States v. Windsor, the ruling that struck down the Defense of Marriage Act. Kennedy has long defended the rights of the LGBT community and I do not think he would change his mind if a corporation sued to use RFRA as a basis for legal sexual discrimination. The government banning sexual discrimination would meet the least-restrictive means test, while the contraceptive mandate did not, a distinction that would surely be important to Kennedy.

It’s sad to see these LGBT groups end their support for the ENDA. It is still a law that could do a lot of good. Any challenge to the ENDA under the guise of religious freedom would almost certainly turn out differently than the Hobby Lobby case, but with support being pulled from the law, it will probably never become an issue.