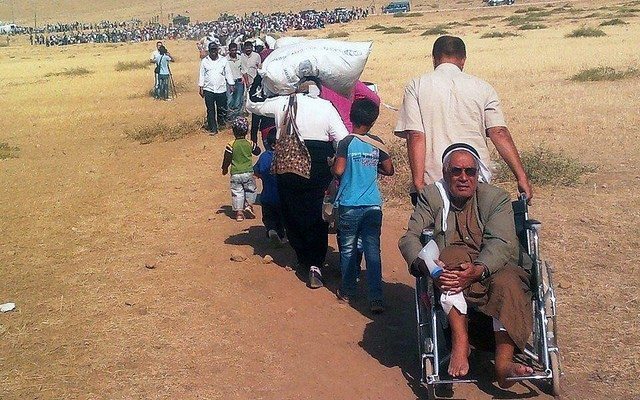 ISIS: The Mentality of Madness

The bone-chilling, stomach-churning sounds of a knife tearing through human flesh followed by the camera panning over a decapitated corpse lying in a pool of the blood that once sustained it played on the screen. Yet, following this savage montage of brutality, no credits rolled. Those nauseating and disturbing sounds were not fabricated in a Hollywood studio. Those haunting images, permanently tattooed into the viewer’s mind, were not created with fake blood and body parts.

The most recent video released by the Muslim extremist group ISIS is a jarring demonstration of the sheer brutality going on in the Middle East today. Immediately after viewing this heinous, offensive act, it took awhile for the feeling to return to my numbed face. I felt as if I had received a massive blow to my gut. Once I could wrap my mind around what I had just seen and the revelation that yes, this was real, I was overcome by a tidal wave of emotion. Rage, sadness, and helplessness were just the tip of the iceberg of what I felt.

After discovering more about the man who was mercilessly slaughtered for all to see as a warning to the United States and its allies, I became even more outraged. Alan Henning was a father of two and dedicated husband from England who had traveled to Syria to partake in aid work. The injustice of his death astounded me. I simply cannot imagine the depth of grief his family is feeling right now, and will continue to feel for the remainder of their lives. I was struck with the revelation that this is exactly how ISIS wanted the viewers of this murder to feel.

Then the questions began swirling dizzyingly in my mind. Why is ISIS committing these unforgivable acts of barbaric violence? In a recent article, Britain’s Telegraph provided insights into the psychological motivation for such public brutality. First on the list is the dissuasive power of fear. One of the reasons the Iraqi people have withheld from engaging ISIS in battle, the article purports, is the sheer element of extreme violence utilized by ISIS fighters. The article makes the insightful inquiry, “which poorly paid soldier wishes to risk decapitation, impalement, or amputation for the sake of a distant, crumbling government? Fear is a uniquely effective weapon.”

Additionally, the members of the Islamic state feel that the United States and its allies will be equally deterred from engaging in militant action against them if it means its citizens will meet such an abhorrent fate. But honestly, I cannot imagine that its enemies ceasing their attempts at military interference would halt ISIS’ streak of terror.

The last point made by the author of the article explains why the murder of an individual rather than a large population affects us so much. Selecting a single person via a methodical, calculated process produces a means of propaganda not likely to be forgotten, which is the nature of terrorist acts. With the detonation of a bomb, the deaths are numerous and quick and lack a specific individual target. Although deaths by any means of violence are horrific, acts of beheading are chilling and terrifying in that they are a complete desecration of the body by the hand of another human.

However, when addressing the effectiveness or lack thereof of these acts, the article points out that they often backfire entirely. When my eyes beheld the merciless slaughter of an innocent man by the ISIS executioner, I was anything but turned to sympathy for their cause. It merely deepened the chasm of my anger and hatred for their “cause,” if you can even call it that. It made me realize the gravity of the challenge imposed by the extremist group in terms of its defeat. By demonstrating the lack of humanity possessed by its members, ISIS has hurled coals into the already blazing fire of animosity and antipathy bore by its enemies.

Has ISIS learned nothing from its predecessors? Engaging in brutal violence that clearly knows no bounds was one of the major downfalls of al-Qaeda. I desire one thing to be the response to the question posed by the article in the Telegraph, “the modern jihadist’s dilemma: when does a strategy of calibrated terror turn into a self-defeating orgy of violence?” I hope that their “strategy” brings about their downfall before anyone else falls victim to it. No child should have to lose a parent, no one should have to lose a dedicated friend, and no innocent person should perish at the hands of hate.

Watching the brutal killing of this man grounded, humbled, outraged, and upset me in ways I never could have imagined. I would never wish my worst enemy to see the video. The menacing voice of the executioner, the sounds of the beheading itself, and the final words of the victim will forever echo in my mind. The images I beheld are forever seared into my retinas. Now, my passionate desire to see the end of violence in the Middle East is stronger than it ever was.

Marisa Mostek
Marisa Mostek loves globetrotting and writing, so she is living the dream by writing while living abroad in Japan and working as an English teacher. Marisa received her undergraduate degree from the University of Colorado in Boulder and a certificate in journalism from UCLA. Contact Marisa at staff@LawStreetMedia.com.
Share:
Related ItemsBeheadingBritainGovernmentHostageIraqISISIslamic StateIslamic State of Iraq and SyriaMiddle EastMilitaryRefugeesSyriaTerrorismViolence