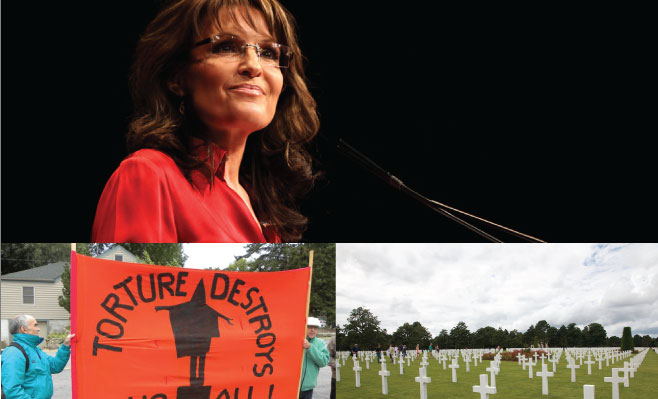 Sarah Palin likes Donald Trump, but doesn’t believe he made it all the way to the White House on his own. On the holiday edition of the Breitbart News Daily radio show she claimed that God was responsible for Trump’s win. In the show, she said she saw the role “divine providence” played on the campaign trail. She said people have been desperate for a change after the country’s deterioration and that his victory was due to people praying to God that the rest of the citizens would wake up. Read the full article here.

In the years following the 9/11 terrorist attacks, the CIA broadened its torture toolkit. Detainees were stuffed in boxes. They were forced to spend hours holding uncomfortable positions, sometimes barred from sleeping for days at a time. And of course, there was waterboarding. In October 2015, two men who were subjected to the CIA’s interrogations at secret prisons in Afghanistan filed lawsuits against the two CIA contractors who sculpted the agency’s torture program. Read the full article here.

3. New Rules in Texas Will Require Burial or Cremation of Fetal Remains

Texas established new rules preventing health care facilities from disposing of fetal remains following an abortion or any miscarriage that requires a medical procedure–instead, the state will now require women to pay for the burial or cremation of those remains. Read the full article here.

Alexis Evans
Alexis Evans is an Assistant Editor at Law Street and a Buckeye State native. She has a Bachelor’s Degree in Journalism and a minor in Business from Ohio University. Contact Alexis at aevans@LawStreetMedia.com.
Share:
Related ItemsAbortionBest of the WeekCIACremationDonald TrumpICYMIIn Case You Missed ItSarah PalinTexas