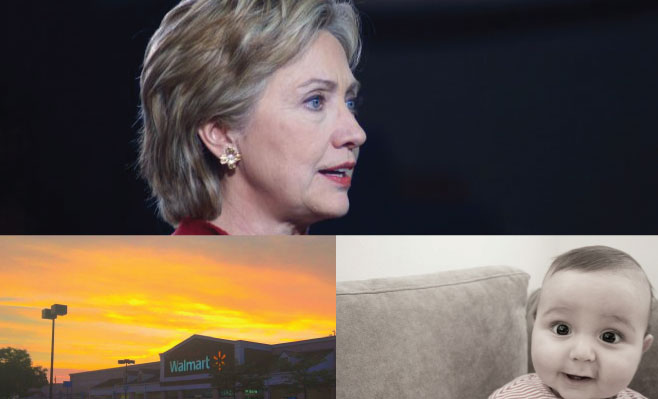 The rumors surrounding Hillary Clinton’s health won’t stop, Walmart bought Jet.com, and Finnish baby boxes are saving lives. ICYMI, learn about all that and more this Monday with Law Street’s best of the week!

1. Clinton’s Pneumonia: A Post-Speech Scare, a Body Double, and a Tame Trump

The facts are thin, and the story even thinner: Hillary Clinton has pneumonia. That’s pretty much it. But of course, that raises some very intriguing questions–especially if you’re a conspiracy theorist: Has she been harboring the disease, shielding her failing health from the media since she was Secretary of State? Did she contract it while delivering a contracted speech to Goldman Sachs? And given the very fact that Clinton has spent her entire career tag teaming with a body double–in speeches, in meetings with now-deposed Middle East dictators, at a dinner date with Bill–has she already moved on from not only this election season, but this life? Read the full article here.

2. What Walmart’s Purchase of Jet.com Says About the Retail Industry

In August, Walmart purchased the online-only retail website Jet.com for $3 billion. Before the sale, Jet.com forecasted that it would be losing money until at least 2020, as it attempts to establish itself prior to becoming profitable. That raises the question of why the world’s largest retailer, with an online presence of its own, would decide to buy a fledgling retail site that didn’t plan on making money for several years. Read on to find the answer to that question and how it is influenced by the changing retail marketplace, where online presence is more important than brick and mortar stores and is necessary to compete against online behemoths like Amazon and Alibaba. Read the full article here.

3. Thinking Inside the Box: How Finland Makes Parents and Babies Happy and Healthy

Washington, D.C. has the highest infant mortality risk of all the world’s high-income capitals–7.9 deaths for every 1,000 births. But the infant mortality rate in Finland is much lower, and one of the reasons for this is the simple but effective Finnish baby box. All new parents in Finland are eligible to receive a box from the government to help them through the early stages of their child’s birth. Inside the box, there are essential items for raising an infant such as clothes and, because it is Finland, a snowsuit. The box itself doubles as a crib, reducing the risk of accidental death during sleep. Read the full article here.

Alexis Evans
Alexis Evans is an Assistant Editor at Law Street and a Buckeye State native. She has a Bachelor’s Degree in Journalism and a minor in Business from Ohio University. Contact Alexis at aevans@LawStreetMedia.com.
Share:
Related ItemsBest of the WeekFinlandHillary ClintonICYMIIn Case You Missed ItInfant MortalityJetPneumoniaWalmart