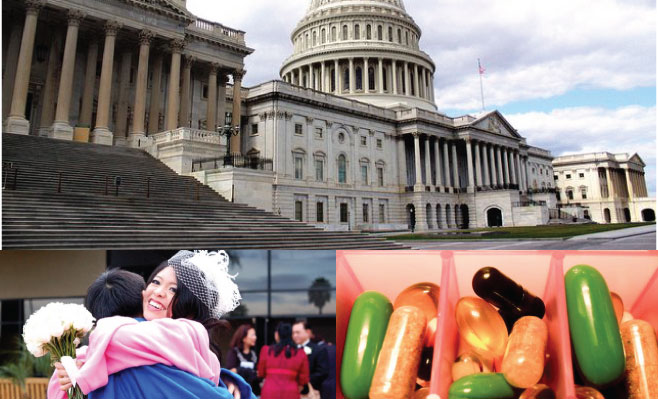 It’s the day after the Oscars and you’re probably still groggy from staying up late last night to watch red carpet interviews, Jimmy Kimmel’s Trump jabs, and that cringeworthy best picture snafu. Am I right? If so, ease into the new week with Law Street’s best of the week.

A group of pro-pot federal lawmakers have teamed up to announce the formation of the first-ever Congressional Cannabis Caucus. The bipartisan effort will work on legislation related to marijuana legalization and regulation, proving that perhaps Congress is taking the issue of marijuana legalization seriously.

Remember the Snuggie? The infomercial phenomenon product that allowed us to be covered with a blanket while also having access to our arms? Was it a blanket or a robe? A federal trade court has now gotten involved in that debate, ruling that Snuggies should be categorized as blankets, not clothing.

When his father was dying of cancer in 1999, Daniel Reingold brewed a remedy that would not cure his fatal disease, but might alleviate his pain: marijuana-infused tea. Reingold, now the president and CEO of RiverSpring Health, later brought his first-hand experience with the medical properties of marijuana to a nursing home his company operates in the Bronx. The Hebrew Home, in Riverdale, allows its residents to find late-in-life relief from a leaf that doesn’t grow in the facility’s garden: marijuana, in the form of cannabidiol (CBD) pills.

Alexis Evans
Alexis Evans is an Assistant Editor at Law Street and a Buckeye State native. She has a Bachelor’s Degree in Journalism and a minor in Business from Ohio University. Contact Alexis at aevans@LawStreetMedia.com.
Share:
Related ItemsBest of the WeekCannabis CaucusICYMIMarijuana PillsSnuggies