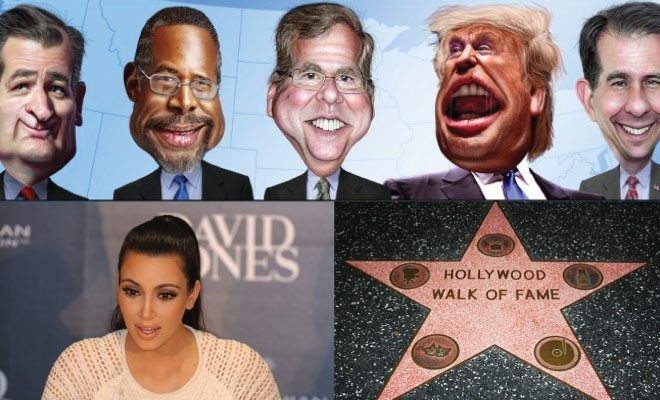 On Thursday night, the top ten Republican presidential candidates gathered in Cleveland, Ohio to duke it out on stage for the GOP nomination during the first primary debate of the year. Candidates were asked questions on a wide range of topics, from what they believe is the best approach to combat ISIL in the Middle East, to whether or not God has influenced their decisions to run for President. Read the full article here.

Even though the world very well may be reaching its breaking point with how much Kardashian news coverage it can take, recent legal trouble between the family’s top breadwinner Kim Kardashian West and the Food and Drug Administration has warranted keeping the reality stars in the spotlight. Read the full article here.

#3 Celebrities Running for Office: Familiar Faces in the 2016 Races

Donald Trump is certainly dominating the news when it comes to the race for the 2016 Republican presidential primary. But “The Donald” didn’t get his start as a politician–he was a business mogul and reality television star before anyone ever saw him on a presidential poll. While that may seem weird to some, celebrities who have gotten famous through other means are consistently trying to join the political ranks. Here are five other celebrities running for office in 2016–and I’m betting they’re just the tip of the iceberg. Read the full article here.

Anneliese Mahoney
Anneliese Mahoney is Managing Editor at Law Street and a Connecticut transplant to Washington D.C. She has a Bachelor’s degree in International Affairs from the George Washington University, and a passion for law, politics, and social issues. Contact Anneliese at amahoney@LawStreetMedia.com.
Share:
Related Items#1#22016 Elections3CelebritiesElectionICYMIKim KardashianRepublican Debate