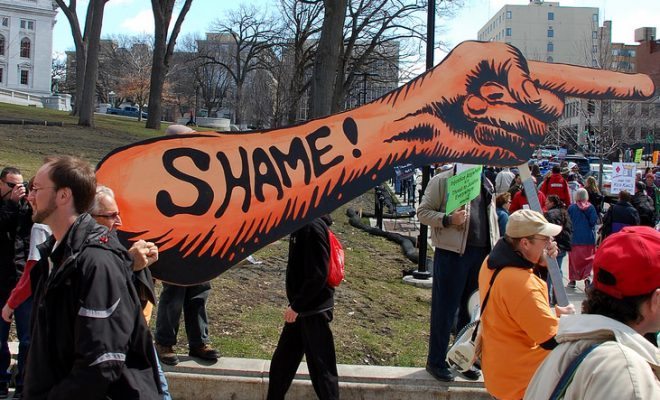 The cacophony of disapproving mutterings and boos gave way to a sharp chant: “Shame! Shame! Shame!”

No, this was not an NBA Finals game or even the response to a bad film. It was the House floor on Thursday when a handful of Republicans switched positions after time expired on a vote. The vote was on an amendment that Democrats say would have furthered protections for the LGBT community. What initially looked like a 217-206 “yea” vote for the measure–which was drafted by Rep. Sean Patrick Maloney (D-NY)–became a 212-213 “nay” vote.

In an unusual move, GOP members were allowed to switch their votes after the clock expired, and without walking up to the front–where each member whose mind had changed would be identified. Instead, they were able to privately change their vote through electronic vote counters.

Maloney was irate about the “craven” and “ugly” episode, “It tells me talk is cheap, and all this happy nonsense about letting the House do its will is just that: nonsense,” he told The Hill.

His amendment would have essentially prevented federal funding from going to companies that claim religious freedom in the name of discriminating against LGBT workers, nullifying a provision in a defense bill passed by the House on Wednesday that critics say would have taxpayers funding discrimination against the LGBT community.

The National Defense Authorization Act for the 2017 fiscal year would effectively increase the salary of U.S. military personnel. But it also contained an amendment drafted by Rep. Steve Russell (R-Oklahoma) that would ensure federal funding was not discriminatory toward companies with strong religious views. Critics contend that, if passed, the bill’s language would allow those companies to receive taxpayer money regardless of whether they discriminate against LGBT workers on the basis of their religious views.

The scene on the House floor was a he-said-she-said game involving leaders and rank and file members from both parties. Kevin McCarthy (R-California), the House Majority Leader, was the one who Democrats suspect led the vote change. Maloney’s account of an exchange with McCarthy exhibits the combative nature of a divided House, where each side is steadfast in its viewpoint while some members have reelection in their sights:

“I said, ‘What are you doing? You can let this go; your own members are supporting it,’ and he said, ‘Get back on your own side of the aisle.’ And I said to him, ‘What side of the aisle am I supposed to stand on to support equality?'”

Four of the Republicans who changed their vote will be up for re-election this year.

What does Paul Ryan (R-Wisconsin), Speaker of the House, think about this schoolyard kerfuffle? “I don’t know the answer. I don’t even know,” he said.

Alec Siegel
Alec Siegel is a staff writer at Law Street Media. When he’s not working at Law Street he’s either cooking a mediocre tofu dish or enjoying a run in the woods. His passions include: gooey chocolate chips, black coffee, mountains, the Animal Kingdom in general, and John Lennon. Baklava is his achilles heel. Contact Alec at ASiegel@LawStreetMedia.com.
Share:
Related ItemsDemocratsDiscriminationHouse FloorLGBTRepublicans