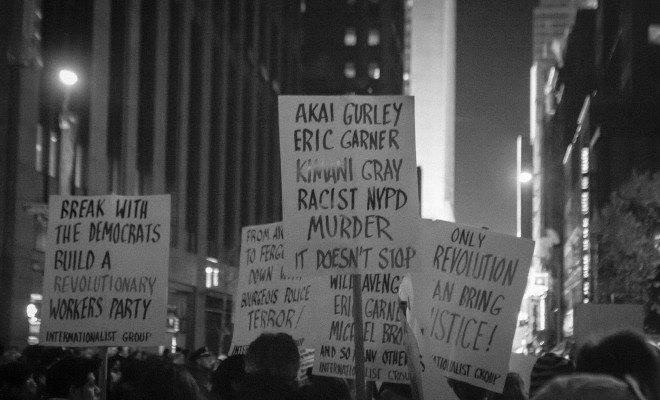 If you live in a major metropolitan area, or honestly even a small one, there’s a very decent chance that you’ll see protests today. You probably saw some last night as well. For any of you who have been living under a particularly comfortable and sheltered rock lately, the protests focus on the cases of two black men killed by police officers. Michael Brown, an 18 year old in Ferguson, Missouri, was shot and killed by Officer Darren Wilson on August 9, 2014. On November 24 it was announced that a grand jury had decided not to indict Wilson. Next, there’s the case of Eric Garner in New York, who was killed by Officer Daniel Pantaleo on July 17, 2014. Pantaleo was filmed putting Garner in a chokehold, even though that tactic is banned by the New York Police Department.

Here’s an example of the “hands up don’t shoot” gesture being used in protest:

And Garner’s last words, which have become a rallying cry:

I almost can't read this. So painful. So ugly. #ICantBreathe pic.twitter.com/KVVbK6Gf0A

The protests have been taking place all over the United States. New York, where Garner was killed, was especially busy. There was a “die-in” at Grand Central Station yesterday evening; a “die-in” is when protesters lie on the ground, silently.

Hundreds of people staged a "die-in" at Grand Central in NYC after #EricGarner decision. http://t.co/che6tRNyli pic.twitter.com/8cNl2DsEUw

Protesters marched through New York City and temporarily blocked traffic at major transportation hubs, including the Lincoln Tunnel. One of the protesters explained her motivations, saying:

Every 28 hours a young black man is killed by police. Only 2 percent of police are indicted. Those numbers are crazy. It’s telling young black men that their lives don’t matter and their deaths can be passed over.

Protests were also very active in our nation’s capital. Last night, protesters flooded Dupont Circle and stopped traffic, as well as at some other locations in Northwest Washington. Today there will be a protest over by the Department of Justice at 4:00pm.

Cities all over the country look like this, and I’m going to leave these pictures and videos here, because I think they say more than words ever could:

Seattle protests no indictment for NYPD officer whose chokehold led to death of #EricGarner >> http://t.co/nXEihNYg4p pic.twitter.com/I6PZktVbge

Garner widow on husband's killer: 'No I, don't accept his apologies’ http://t.co/NLncfA5Mft pic.twitter.com/pbkP6TCoVA

Those are faces of change. Faces tired of the way that our system has been failing. Faces that have had enough. Faces that deserve to be, finally, listened to.

If you’re interested in joining a protest, here’s where they’re happening today. They aren’t going to end anytime soon, because this crisis clearly isn’t ending anytime soon either.