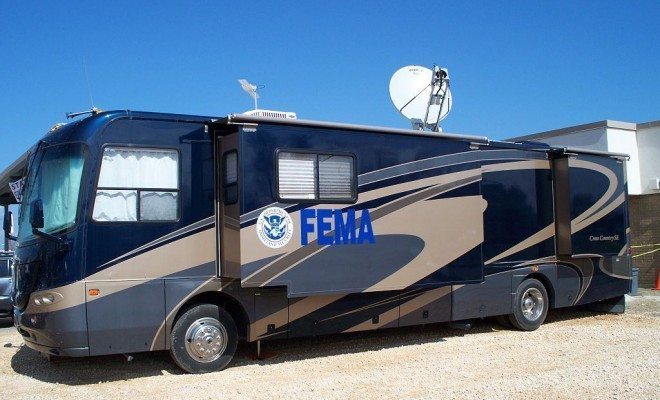 Image courtesy of [JungleCat via Wikimedia]

The Federal Emergency Management Agency (FEMA) just announced that they’re not playing nice with climate change-deniers anymore. FEMA has officially proclaimed that unless states create plans that consider how to combat climate change, they may not be eligible for disaster preparedness funds from the agency.

The new FEMA guidelines acknowledge the problems that have come or may develop from climate changes, including things like more intense storms, heat waves, drought, and flooding. Given that all of those are situations in which states often turn to FEMA for funding and assistance, the agency is asking that when making their disaster preparedness plans, states “assess vulnerability, identify a strategy to guide decisions and investments, and implement actions that will reduce risk, including impacts from a changing climate.”

It’s important to note that this change won’t affect how much aid FEMA will give to states affected by natural disasters such as earthquakes, storms, and hurricanes. That’s called disaster relief, and it’s not part of this change. Rather, if states don’t provide adequate hazard-mitigation plans that acknowledge climate change and its effects, it will withhold the funds for that disaster preparedness. These funds are used for things like training and purchasing equipment. Overall, FEMA gives out grants of this sort that total about $1 billion each year.

This creates a big political problem for some of America’s most visible and prominent Republican governors, many of whom have long either advocated that climate change is not a product of human activity, or that it’s simply not happening. Deniers who are now on the chopping block include Governors Rick Scott (Florida), Bobby Jindal (Louisiana), Chris Christie (New Jersey), Greg Abbott (Texas), and Pat McCrory (North Carolina).

Jindal and Christie have, at the very least, been floated in talks about possible 2016 Republican contenders. Ironically, Louisiana gets the most disaster preparedness money and New Jersey comes in at number three, so Jindal and Christie, as well as the other Republican governors who deny climate change, are faced with an interesting catch-22. They can either sign off on plans that comply with FEMA regulations and lose some political clout among the conservatives they may have to woo in a presidential primary, or refuse to acknowledge climate change and lose funding that their states probably need.

This policy shift comes amid many debates happening around the country over how states should individually handle climate change. There are allegations that in Florida, for example, there’s an “unofficial policy” to not use the words climate change, even when discussing the phenomenon and its effects.

No matter what, this is certainly a bold move on FEMA’s part, and shows that politics can’t always take the front seat when it comes to safety. FEMA is making a move that it thinks will help mitigate the results of climate change–if it ruffles a few political feathers in the meantime, so be it.