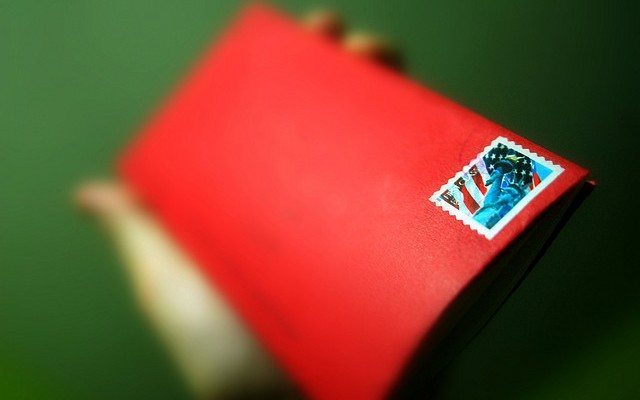 Natalie Allman, a 29-year-old mother of two, is a victim of domestic abuse. In 2012 the Hereford, England native was beaten with a dumbbell and had her throat slashed by her then-fiance Jason Hughes, 42. His reason for assaulting the mother of his children–he wanted to make her look ugly as a punishment for breaking up with him.

The savage attack lasted for seven hours in the couple’s home in Ross-on-Wye, Herefordshire, with both of their young twin sons watching. Luckily Allman survived the attack and found justice when her ex, a former territorial army soldier, was sentenced to nine years in prison for the attack. Unfortunately, this justice has strings attached.

She is being forced to send her abuser letters in jail with updates on their five-year-old twin boys, and if she doesn’t comply she could end up in jail.

Mum whose ex cut her throat ordered to WRITE to him in prison #NatalieAllman #Britain http://t.co/fs0A0EDeZ7 pic.twitter.com/PNfnts9LTw

In January, Hughes applied for a residence and contact order requesting six letters a year as well as phone calls with updates on his children in accordance with the United Kingdom’s Children Act of 1989. Allman, who still bears a visible scar along her throat from the attack, fought back, spending £3,000 in legal fees. However, a judge still ordered her to send him three letters a year on their school progress, health, and emotional development. If she doesn’t comply, she could face a fine or jail time.

The act was designed to make the best arrangements for children after their parents split up, but in this case, the judge’s decision sounds like it’s more for the benefit of the abuser than his children. It’s textbook re-victimization. Distraught after the ruling, Allman told the Sunday People:

We are the victims, not him. I thought he was going to kill me that night for no reason and my boys saw that.

They were terrified. I’m so angry that the law still defends his parental rights and that he is still being allowed to control us from behind bars.

As far as I’m concerned he gave up the right to contact with any of us the night he attacked me but the court doesn’t see it that way.

What about our rights to get on with our lives and forget the trauma he put us through? As long as we are in constant contact how are we going to do that?

For her safety, the letters he writes go to Allman’s father’s home so that Hughes does not know her new address.

A change.org petition asking the Lord Chancellor and Secretary of State Justice Chris Grayling to review the contact order has been started in Allman’s name. In the petition, her supporters claim this order will only perpetuate revictimization stating:

This is nothing more than psychological torture that prolongs the suffering of an abuse victim and her traumatised children. Every birthday a card arrives, and every letter she receives is a cruel reminder of the control he continues to assert over her behind bars.

As of this morning over 18,500 supporters have electronically signed the online petition. They need only 6,500 more to reach their goal of 25,000. Hopefully Grayling listens to the public outcry for this woman. She didn’t survive almost being killed to relive that torture for the rest of her life.

Alexis Evans
Alexis Evans is an Assistant Editor at Law Street and a Buckeye State native. She has a Bachelor’s Degree in Journalism and a minor in Business from Ohio University. Contact Alexis at aevans@LawStreetMedia.com.
Share:
Related ItemsAbuseBritainChildren Act of 1989Domestic ViolenceEnglandHerefordshireJason HughesNatalie Allmanonline petitionUnited Kingdom