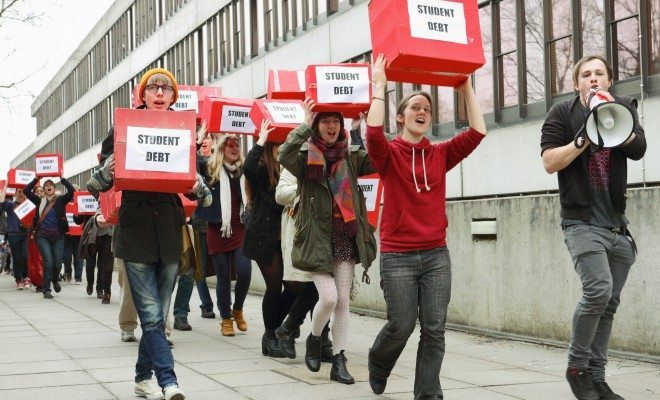 It’s no secret that college education in this country has gotten extremely pricey. For more and more students, the only possible way to gain a higher education is to apply for student loans. Unfortunately, many of the students who take out loans then have a difficult time paying them back. The Department of Education used to employ debt collection companies to track down that money. However, the Department of Education just announced that it will be no longer contracting five of those companies, after they provided inaccurate information to borrowers.

The companies whose contracts are being terminated are Pioneer Credit Recovery, Coast Professional, Enterprise Recovery Systems, National Recoveries, and West Asset Management. According to Bloomberg the reasoning for the decision included findings that:

The companies gave borrowers misleading information about ‘the benefits to the borrowers’ credit report’ and about ‘the waiver of certain collection fees,’ the agency said.

It appears that the Department of Education isn’t going to cut its work off with these five companies overnight. Rather, its planning on “winding down” the contracts and transferring them to other companies.

However, the five debt collection companies are claiming that they were “blindsided” by the Department of Education’s decision. Pioneer Credit Recovery claimed that it had been told last April that it was complying with various regulations. Pioneer also claimed that the Department of Education had conducted 17 different reviews over the course of 2014, and never brought up any concerns or violations to Pioneer.

This decision comes during the middle of a nationwide discussion on student loans, and the viability of for-profit universities. Earlier this week, a letter written by 15 students who attended the for-profit Corinthian Colleges network was shared around the internet. The so called “Corinthian 15” are asking the Department of Education for loan forgiveness. The letter includes the following:

We trusted that education would lead to a better life. And we trusted you to ensure that the education system in this country would do so. But Corinthian took advantage of our dreams and targeted us to make a profit. You let it happen, and now you cash in.

Each month you force us to make payments into an immoral system that profits from our aspirations.

We paid dearly for degrees that have led to unemployment or to jobs that don’t pay a living wage. We can’t and won’t pay any longer.

It’s a powerful message to the Department of Education, and while the department’s move away from predatory debt collectors is a good thing, it’s just a very small step in the right direction.