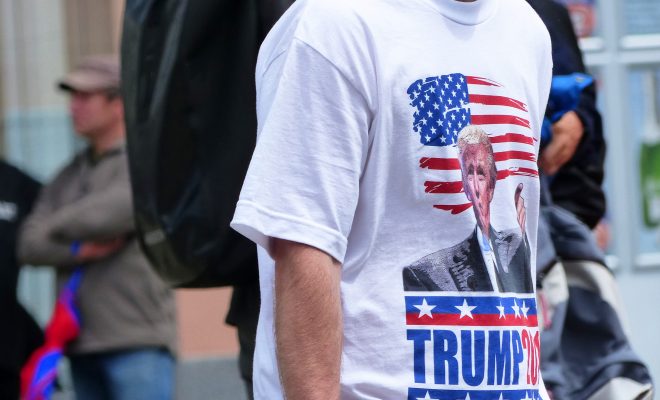 A high school in New Jersey is under fire after someone edited a photo of Grant Berardo in the yearbook without telling him. On picture day, Berardo wore a black t-shirt with the text, “TRUMP: Make America Great Again” on the chest. When he saw the result in the yearbook, he realized the text was gone. Now his parents are demanding answers and one teacher is suspended.

Critics are accusing the school, Wall Township High School, of censoring the kids and violating their First Amendment rights. Two other students also had their photos edited. Wyatt Dobrovich-Fago had a small Trump logo on his vest, and his sister Montana wanted to insert a Trump quote under her freshman class president photo. But both were missing in the final version of the yearbook.

A New Jersey high school is under fire for erasing Trump slogans from its yearbook https://t.co/8mAxFHin1H pic.twitter.com/XrPTkEaRfk

Now the parents of the affected students want the school to issue new yearbooks, including an explanation of what happened. According to Berardo’s father, Joseph, his son was very disappointed as this was the first election he was interested in. The school’s Superintendent Cheryl Dyer said one teacher who was overseeing the production of the yearbook has been suspended.

In a statement on its website, the school points out that there is nothing in the school’s dress code that prohibits students from expressing political views. The digital removal of the Trump slogans and logos was nothing the school’s administration was aware of. And the name of the specific teacher that was suspended has not been released. The statement said:

The allegations referenced above are disturbing, and any inappropriate challenge to these principles will be rectified as swiftly and thoroughly as possible. The actions of the staff involved will be addressed as soon as the investigation is concluded.

To the Berardos, it was peculiar that no one told Grant that there was a problem with his t-shirt to begin with. His mother Tammy works at the school and someone could easily have told her in time for him to re-take the photo. When the family received the photos by mail, the logo was still there. It was just in the final yearbook that it was gone, without any explanation.

Berardo’s father Joseph said that he doesn’t like excessive political correctness. “It gets in the way of meaningful discourse. And, frankly, I hate being on the other side of it now,” he said, referring to being the “victim.” He thinks that ultimately the whole conflict is a matter of freedom of speech. “And if we come to find out they blacked-out Clinton or Sanders shirts, that’s just as egregious,” he said.

Emma Von Zeipel
Emma Von Zeipel is a staff writer at Law Street Media. She is originally from one of the islands of Stockholm, Sweden. After working for Democratic Voice of Burma in Thailand, she ended up in New York City. She has a BA in journalism from Stockholm University and is passionate about human rights, good books, horses, and European chocolate. Contact Emma at EVonZeipel@LawStreetMedia.com.
Share:
Related ItemsConservativeHigh SchoolMake America Great AgainNew JerseyPresident TrumpStudentsYearbook