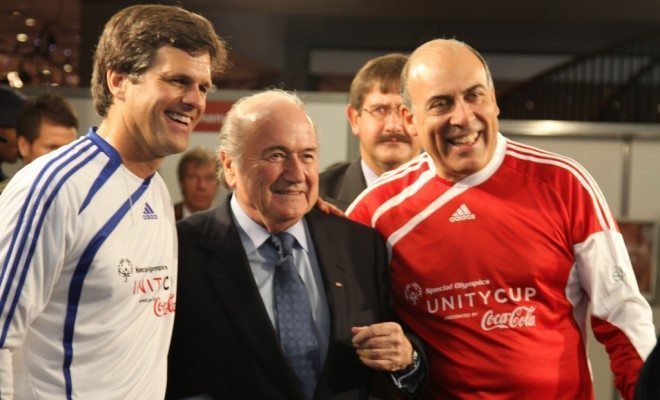 Recently re-elected FIFA president Joseph S. Blatter, known to the world as Swiss Sepp Blatter, announced Tuesday he will step down from his post as president of the international football association’s governing body, following criticism over a corruption scandal.

While 14 of his colleagues were recently indicted on charges of bribery, money laundering, and racketeering, Blatter was left unscathed and re-elected for his fifth consecutive term as FIFA president on Friday, May 29th. During his reelection speech, Blatter rejoiced in his continued reign with the words,

I thank you, you have accepted me for the next four years. I will be in command of this boat called FIFA.

However, Blatter has not escaped blame from the global public over the years, having been labeled a dictator, among other names, and accused of sexism and racism reaching far beyond claims of corrupt laundering practices. According to BBC News, the global citizens’ movement Avaaz was responsible for starting the #BlatterOut campaign, which began trending on Twitter just days before the election. Gary Linekar, the former English footballer and current sports broadcaster, is one of the many to join the campaign against Blatter, who seems to have been at the head of FIFA corruption since 1991.

FIFA members should vote for the good of football, and get rid of a man who’s reigned over a corrupt organisation for too long. #BlatterOut

So what on earth was keeping Blatter in power if so much of the world wanted #BlatterOut? The answer, unlike what most commonly believe, is not so much about the power of the dollar—or the supposed tens of millions of dollars involved in the corruption since 1991—as it is the power of a single vote in any given FIFA presidential election. Each of the 209 national member associations that make up FIFA’s Congress receives exactly one equal vote no matter how much land area the nation possesses or how much of the world’s population lives in each nation. According to the Washington Post, this means the tiny Caribbean island of Montserrat has as much a say as World Cup powerhouses Brazil or Germany in the election. After totaling the member nations counted in the presidential election, here is the breakdown by regional confederation:

So, what Blatter needed to do to get reelected was not to convince the world that he is not as corrupt as his colleagues, but to cater to the areas of the world that would ensure his victory, and he did. Blatter has made what was once a largely European organization a globalized organization, by bringing what he calls “developmental programs” to underprivileged parts of Africa, Asia, and Latin America. Despite where the money came from to start these programs, in doing so, Blatter spoke for most of the 54 votes of the Confederation of African Football (CAF)—the largest number of votes held by any of the six continental confederations above. Amaju Pinnick, the current president of the Nigerian Football Federation, has expressed that,

Without Blatter we wouldn’t enjoy all the benefits we enjoy today from FIFA. What Blatter pushes is equity, fairness and equality among the nations. We don’t want to experiment.

It was not Blatter’s years of experience or money that got him reelected; it was his ability to systematically accommodate the parts of the world that hold the most votes.

The sole person who opposed Blatter in the election for president was Qatari Mohammed bin Hammam, but he withdrew from the race after suspension by FIFA’s ethics committee due to allegations that he offered financial incentives to Caribbean Football Union members. The response to corruption by England’s Football Association and its chairman David Bernstein was to postpone the election, to instill credibility back into the process, and to appoint an independent external committee to make recommendations about future election processes. Yet, the FA’s proposal was again put up to the votes of 206 member nations equally and the election moved forward without delay.

Are Blatter’s or any other FIFA administrator’s corrupt practices inevitable in this day and age of soccer as yet another means of politics? Or is Blatter’s attempt to globalize the world by bringing soccer and developmental programs to countries outside of Europe a kind of affirmative action policy that permits or even necessitates some corruption behind the scenes? Whether you answer yes or no to these questions, FIFA’s Executive Committee might consider an election reform of proportional representation by member nations in order to assure that the next FIFA president elected is preferred in power by all parts of the world instead of only by the continent with the most votes.