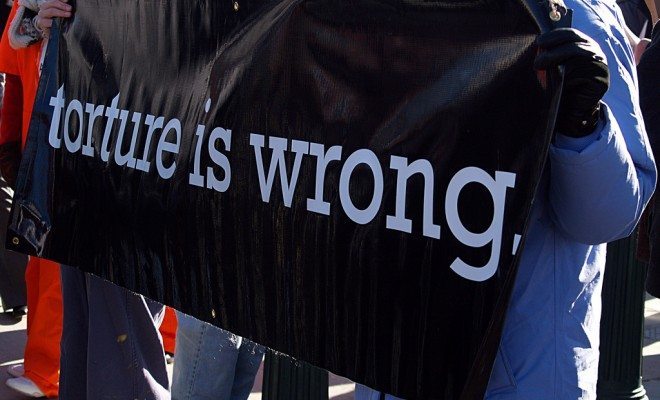 The CIA: How to Get Away With Torture

The nation, and quite frankly the world, is reeling after the disclosure of an investigation by the Senate Intelligence Committee into the Central Intelligence Agency’s (CIA) torture practices following September 11, 2001. The report took a long time to come out–there was significant back-and-forth from the Senate, the White House, and the CIA. But now that it has, there’s no doubt–we regularly tortured people, and it didn’t work. The report is revealing, horrifying, and honestly, not entirely unexpected.

It’s an interesting time to be an American. We’re taught, from the youngest possible ages, that if you do something bad you pay the consequences. Our justice system is proof of that–we have the highest incarceration rate in the world. With freedom comes responsibility. Despite that, the CIA operatives, leaders, and anyone else in our government who were involved in this torture will probably never be punished. It’s like the pot calling the kettle black, except the kettle is someone who’s been thrown in jail for a few years for something like well, selling pot, and the pot brutally tortured approximately 100 prisoners.

There’s significant evidence to suggest that legal tracks were covered with regard to how we treated these prisoners. International Law, as grey and ineffectual a field as it is often considered, does exist. The Geneva Conventions dictate how nations behave in war and peace, and the particularly pertinent part is called Common Article 3, which forbids torture of prisoners. Essentially, it says that if someone is no longer an active participant in the conflict because of various reasons–including being detained–they must be treated humanely and the following cannot happen to them:

(a) violence to life and person, in particular murder of all kinds, mutilation, cruel treatment and torture;

(b) taking of hostages;

(d) the passing of sentences and the carrying out of executions without previous judgment pronounced by a regularly constituted court affording all the judicial guarantees which are recognized as indispensable by civilized peoples.

Perhaps most significantly, in ruling that Common Article 3 of the Geneva Conventions applies to the Guantanamo detainees, the court rejected the administration’s view that the article does not cover followers of Al Qaeda. The decision potentially opened the door to challenges, by those held by the United States anywhere in the world, to treatment that could be regarded under the provision as inhumane.

Now, with the disclosure of this report, U.N. officials are demanding that the U.S. do something. As the U.N. High Commissioner for Human Rights, Zeid Raad al-Huseein, put it while calling for prosecutions:

He also pointed out that the United States did ratify the U.N. Convention Against Torture in 1994. Other U.N. officials, as well as leading humans rights experts have come forward to condemn the U.S.’s actions and demand some sort of accountability. It would be great if there was that accountability, but at this point I would be shocked. Everything the U.S. has done–Bush and Obama administrations alike–indicate that’s not going to happen. Everything in American history indicates that’s not going to happen. We have consistently shied away from the prospect that we could be held internationally accountable for our crimes.

Now, international law is incredibly complicated; the ways in which it applies to American law even more so. No one has the exact answers about what should or could happen here. But what’s almost certainly not going to happen is any sort of American appearance in front of the International Criminal Court (ICC). Located in The Hague, the ICC has the ability to prosecute individuals for various violations of international law. The statute that governs that court–the Rome Statute–has never been ratified by the United States. And the United States has veto power in the U.N. Security Council, meaning we can’t be referred.

The torture report indicates a horrifyingly dark time in this country’s recent history. We have the opportunity to make it clear that we recognize that truth, and an obligation to make sure it doesn’t happen again. We have a chance to show that we screwed up and we’re willing to pay the price. A chance to be an example of all of those ideals–freedom, democracy, right and wrong–that we espouse to other nations. Too bad we’re almost certainly not going to take it.

Anneliese Mahoney
Anneliese Mahoney is Managing Editor at Law Street and a Connecticut transplant to Washington D.C. She has a Bachelor’s degree in International Affairs from the George Washington University, and a passion for law, politics, and social issues. Contact Anneliese at amahoney@LawStreetMedia.com.
Share:
Related Itemsal-QaedaBush AdministrationCIADOJIntelligenceInternational LawObama AdministrationPrisonersSeptember 11The HagueTorture