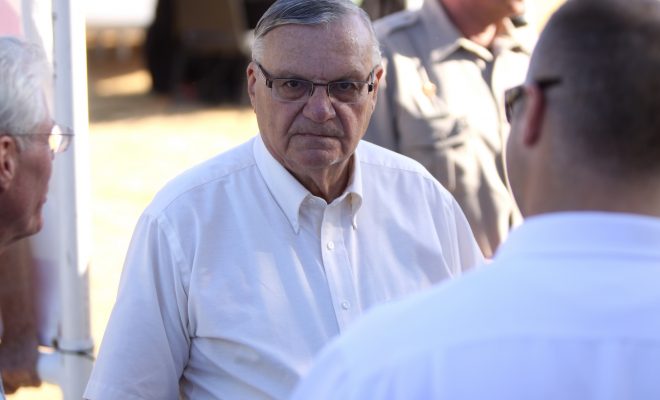 Trump is Considering a Pardon for Joe Arpaio

President Donald Trump said that he is seriously considering issuing a pardon for Joe Arpaio, the former Arizona sheriff who was recently found guilty of criminal contempt for repeatedly profiling Hispanic people in violation of a court order. He has been dubbed “America’s toughest sheriff” and was a staunch Obama opponent who joined Trump in the “birther” movement. And Trump seems to like him quite a bit.

“Is there anyone in local law enforcement who has done more to crack down on illegal immigration than Sheriff Joe?” Trump reportedly said during a conversation with Fox News. “He has protected people from crimes and saved lives. He doesn’t deserve to be treated this way.” Arpaio’s sentencing is scheduled for October 5 and he is facing up to six months behind bars. Trump retweeted a Fox News article about the possibility of a pardon. Yesterday, Trump finally condemned the violence in Charlottesville, so some critics believe that the Arpaio comments might be a nod to white supremacist groups.

Make no mistake: If Trump pardons Arpaio, this would be an official presidential endorsement of racism.

Emma Von Zeipel
Emma Von Zeipel is a staff writer at Law Street Media. She is originally from one of the islands of Stockholm, Sweden. After working for Democratic Voice of Burma in Thailand, she ended up in New York City. She has a BA in journalism from Stockholm University and is passionate about human rights, good books, horses, and European chocolate. Contact Emma at EVonZeipel@LawStreetMedia.com.
Share:
Related ItemsDaily StormerDOJGoDaddyIrelandIsraelJoe ArpaioLeo VaradkharOklahoma CitySwitzerlandTrump