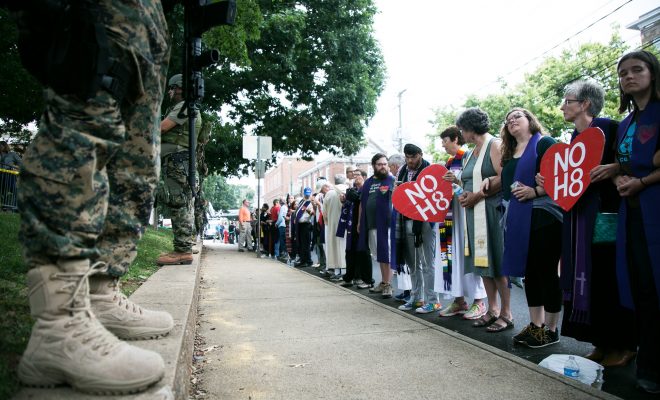 This weekend, a white supremacist protest in Charlottesville, Virginia, turned violent. The march began on Friday night, with protesters carrying torches, Nazi flags, and chanting a Nazi slogan. On Saturday, a lot of counter-protesters arrived at the scene. On Saturday afternoon, a car drove straight into the crowd of counter-protesters, killing one woman and injuring over 30 others. The driver was later identified as 20-year-old Ohio native James Alex Fields Jr. He has been charged with murder. Governor Terry McAuliffe declared a state of emergency Saturday evening.

President Donald Trump finally commented from his New Jersey golf club, saying that he condemns the display of violence “on many sides.” But this very brief and vague comment was heavily criticized for not condemning the brazen white supremacy on display.

The Department of Justice has opened a civil rights investigation into the violence and even Attorney General Jeff Sessions made a more emphatic statement than the president. “The violence and deaths in Charlottesville strike at the heart of American law and justice. When such actions arise from racial bigotry and hatred, they betray our core values and cannot be tolerated,” he said.

If ISIS rammed a car into a crowd this would be labeled quickly & logically. Charlottesville – call it what it is, domestic terrorism.

Emma Von Zeipel
Emma Von Zeipel is a staff writer at Law Street Media. She is originally from one of the islands of Stockholm, Sweden. After working for Democratic Voice of Burma in Thailand, she ended up in New York City. She has a BA in journalism from Stockholm University and is passionate about human rights, good books, horses, and European chocolate. Contact Emma at EVonZeipel@LawStreetMedia.com.
Share:
Related ItemsBarnaby JoyceCharlottesvilleDOJDonald TrumpIndiaJohn OliverJohnny DeppMarshawn LynchWeird Al