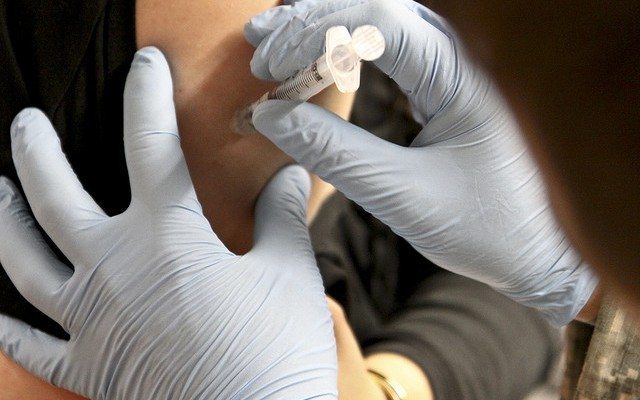 It was probably only a matter of time, but vaccination has officially become a political issue. The particular hot topic at the moment is the vaccination of measles. Despite the fact that the virus had been declared “eliminated” from the United States in 2000, there have been approximately 100 cases recently stemming from outbreaks at Disney theme parks–particularly Disneyland in California. Public health officials are encouraging parents to make sure that their children get vaccinated. But that doesn’t mean that it’s not becoming a political conversation–while some politicians like President Barack Obama have encouraged parents to get their children vaccinated, others, like New Jersey Governor Chris Christie have continued to emphasize that it’s an individual choice to be made by parents.

There are plenty of reasons why children don’t get vaccinated–for an in-depth look, check out our issues brief on the topic–but at the most simplistic level, they can get sorted into two camps. The first group are children whose parents choose not to vaccinate them, whether it be because of religious beliefs, concerns about the side effects of vaccines, or whatever other personal reason. The other group is children who physically can’t be vaccinated, usually because they have some sort of allergy to the vaccines, or some illness or condition that would it make it unsafe to be vaccinated. This also includes children who are too young to receive the vaccine–although that’s obviously only a temporary situation. Basically since the measles vaccine became mainstream, those who actually can’t be vaccinated are protected, because those around them can’t get or spread the disease. Unfortunately, as fewer people are vaccinated, that becomes less true, and the spread of measles becomes a legitimate concern.

That being said, it’s not illegal to not vaccinate your child in most places–some states, such as California, are pretty generous when it comes to granting exceptions. Particularly under fire right now are the loopholes that California allows when it comes to its exemption laws, which do require that parents wishing to forego the vaccines undergo “counseling” and get signatures from healthcare professionals. According to Mercury News, those parameters aren’t actually that strict, because:

Counseling can be given by naturopaths, who practice alternative medicine and typically oppose vaccination.

People who oppose vaccination because of religious beliefs can skip counseling, a policy change that Gov. Jerry Brown instituted when he signed the updated law.

This has led to a concerning number people in California being unvaccinated–in 2014, 2.5 percent of kindergartners had vaccine exemptions. That doesn’t sound like that many out of context, but that’s pretty much one unvaccinated kid for every other classroom. Children and teens who are unvaccinated are being sent home from school, and there’s a real worry that measles could continue to spread among the unvaccinated population, much of which is clustered into specific schools and neighborhoods.

The CDC put out a statement a few days ago urging any Americans who aren’t vaccinated to do so as soon as possible. President Barack Obama echoed the CDC’s comments on the Today show. However, New Jersey Governor Chris Christie came under fire for a statement he made in response that said that the government should “balance” government and parent interests when it comes to vaccines, saying:

Mary Pat and I have had our children vaccinated and we think that it’s an important part of being sure we protect their health and the public health. I also understand that parents need to have some measure of choice in things as well, so that’s the balance that the government has to decide.

Christie has since clarified that statement, releasing a statement as follows:

The Governor believes vaccines are an important public health protection and with a disease like measles there is no question kids should be vaccinated. At the same time different states require different degrees of vaccination, which is why he was calling for balance in which ones government should mandate.

Obviously this is a clear example of a big difference between Democrats and Republicans–a federal approach vs. a more state-based one is certainly open for debate. That being said, it’s important that our elected officials stay strong and and stand together in encouraging all Americans who are able to get vaccinated or vaccinate their children to do so. There’s a time for politics, but now, with this topic, isn’t it.

Anneliese Mahoney
Anneliese Mahoney is Managing Editor at Law Street and a Connecticut transplant to Washington D.C. She has a Bachelor’s degree in International Affairs from the George Washington University, and a passion for law, politics, and social issues. Contact Anneliese at amahoney@LawStreetMedia.com.
Share:
Related ItemsCaliforniaChris ChristieDisney WorldDisneylandGov. Jerry ScottMeaslesPoliticsPres. Barack ObamaPublic HealthVaccinationVaccine