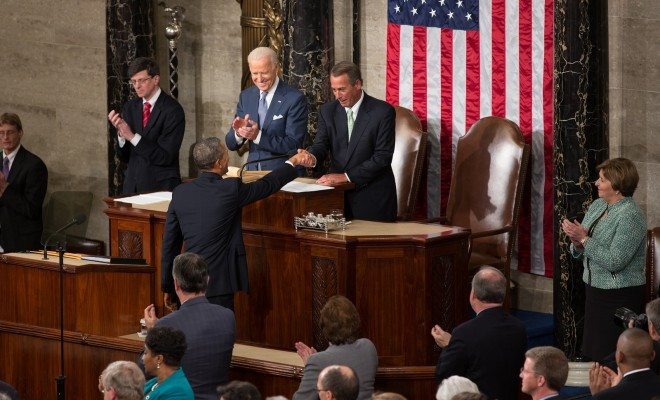 John Boehner says the House of Representatives is suing President Obama for not faithfully executing the laws he has sworn to uphold. The suit claims that when Obama delayed the employer mandate for ObamaCare, he changed the law, something which can only be done by Congress. But this might not be Boehner’s only motive to sue. It sounds a bit implausible, considering Boehner has no love for the President, but he may be suing Obama to avoid impeaching him. And if that’s the case, it’s a downright genius move.

Boehner himself has said impeachment is not being considered, but he needs to silence the calls from other Congressman and noisy pundits in his party. Impeachment is a bad option for the Republicans for a few reasons. One is that Boehner knows that even if the House did impeach Obama, the Senate would never go along with it. Also, as unpopular as Obama is, he’s still more popular than the House of Representatives. The same thing happened the last time Republicans impeached a president–President Bill Clinton. The whole ordeal led to the Speaker of the House having to resign and Republicans losing the midterm elections. Boehner seems to know that it is a terrible political move to impeach the president.

But perhaps the biggest reason Boehner wants to silence the calls for impeachment is that the Democrats are using impeachment speculation to fuel their fundraising efforts. It’s an election year where the left’s base did not have much to be excited about, but the impeachment talks have riled them up. For example, you’d think that FOX news would be very excited about Obama impeachment rumors, and would be covering the issue far more than any other news organization. In fact, they have mentioned impeachment a respectable 95 times so far this month. But MSNBC, the liberal bastion, has mentioned impeachment a whopping 448 times. Both organizations claim to deliver unbiased news, but I think we all know that FOX and MSNBC are on opposite ends of the political spectrum, and the fact that the liberal news station mentions impeachment so much more shows how they want to get their base riled up. Boehner knows every time a Republican calls for impeachment on TV, it becomes a sound bite at the next Democratic Party fundraiser.

The lawsuit is also largely symbolic. It is doubtful that a court will say the House has standing to sue, and even if the House somehow wins the suit, the result would just be that Obama would immediately have to enforce the employer mandate. But odds are the case wouldn’t be decided until after the mandate begins enforcement in 2015 anyways.

There’s nothing for Boehner to gain legally, but there’s a lot to gain politically. This allows him to show he is doing something for those calling for impeachment. It allows conservative representatives to go back to their districts and tell their constituents that they have taken action against Obama. It is a symbolic gesture against Obama that will come to nothing in the long run–exactly what Boehner needs right now. This move also buys Boehner precious time. He can argue that impeachment would be pointless before the court makes it ruling. He’d be able to stretch out that excuse until the 2016 elections, at which point the whole impeachment argument would become null and void anyways.

Boehner has let the conservative end of his party control him before. For example, he could not get them in line nine moths ago, leading to a government shutdown. This lawsuit is his way of asserting control as the Speaker of the House. While the Democrats will still be able to fundraise by slamming the lawsuit, it gives substance to Boehner’s claim that impeachment is not being considered. The media will also focus on the lawsuit instead of impeachment rumors. This lawsuit has allowed Boehner to appease his conservative base, while limiting Democratic fundraising talking points. He found the narrowest of lines and is balancing on it beautifully. It will only take a slight breeze from his right to knock him off, but until that happens, this is an excellent move on Boehner’s part.