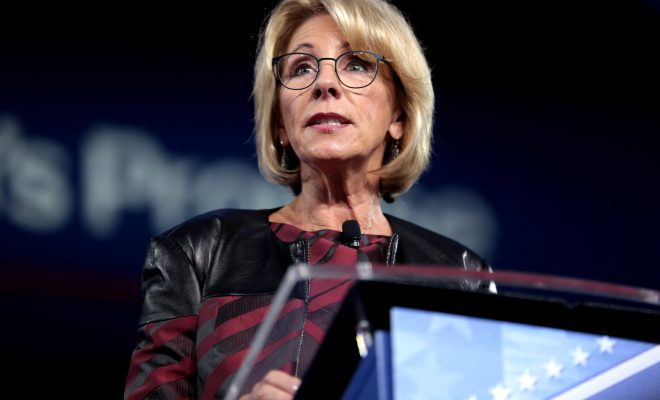 Last month, the Education Department decided to freeze rules put in place by the Obama Administration that were meant to erase the student loan debts of students who had been defrauded by sketchy colleges. The rules were supposed to take effect on July 1.

But in May, a California association of for-profit schools filed a lawsuit in an attempt to block the new rules. Citing the lawsuit, Secretary of Education Betsy DeVos put the rules on hold. Now 18 states and the District of Columbia are suing DeVos and the department. Maura Healey, the Massachusetts attorney general who led the states’ effort, said:

Since day one, Secretary DeVos has sided with for-profit school executives against students and families drowning in unaffordable student loans. Her decision to cancel vital protections for students and taxpayers is a betrayal of her office’s responsibility and a violation of federal law.

DeVos called the so-called borrower defense rules “muddled” and “unfair to students.” But on Thursday, two students who have borrowed money for studies sued the Education Department over the same issue. They had both attended the for-profit New England Institute of Art in Massachusetts, which was the target of a federal lawsuit in 2015.

MA is challenging Betsy DeVos’s illegal attempt to protect fly-by-night schools that cheat students & bury them in mountains of debt.

There is already a federal law in place that allows students to apply for loan forgiveness if they think they have been a victim of fraud, but the Borrower Defense to Repayment rule would facilitate and streamline the process. It was created when a massive number of students applied after some major for-profit education companies were shut down or filed for bankruptcy a few years ago.

More than 15,000 claims were filed after the Corinthian Colleges collapse alone, by students owing over $247 million. As of now, taxpayers have to foot that bill. The Obama-era regulations that DeVos froze would have required the schools that defrauded students to take responsibility. It would also forbid schools from implementing mandatory arbitration contracts that prohibit students from taking legal action against the schools.

Critics of the borrower defense rule said it’s too hard on individual schools. The association that filed the lawsuit in May, the California Association of Private Postsecondary Schools, said that the rule “threatens the existence” of some of the private schools.

But these schools deceived students by exaggerating job placement statistics; in one case, a school claimed that 100 percent of its students found a job in their field after graduating. The real number was 0 percent, the Education Department found in 2015. Other times, the schools closed unexpectedly and left the students without degrees but with massive debt.

The students that filed a lawsuit on Thursday said they already applied to have their loans written off under the older procedures. But at this point their cases have been pending for two years.

Emma Von Zeipel
Emma Von Zeipel is a staff writer at Law Street Media. She is originally from one of the islands of Stockholm, Sweden. After working for Democratic Voice of Burma in Thailand, she ended up in New York City. She has a BA in journalism from Stockholm University and is passionate about human rights, good books, horses, and European chocolate. Contact Emma at EVonZeipel@LawStreetMedia.com.
Share:
Related ItemsBetsy DeVosCharter SchoolsCollege StudentsEducation DepartmentFor Profit SchoolsStudent DebtStudent Loan