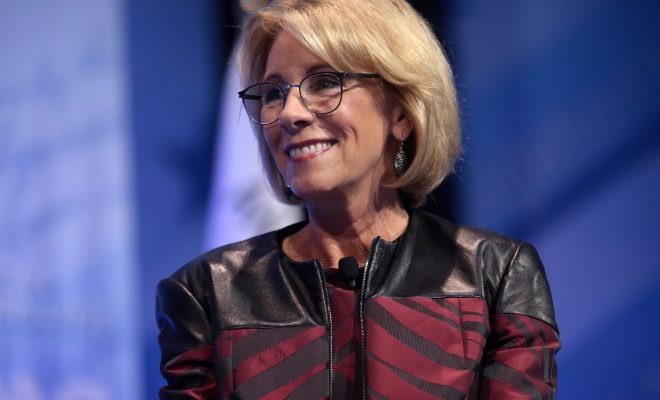 Trump’s new education budget draft appears to have an upsetting provision for many holders of student loans who work for the government and non-profit sector–it gets rid of the Public Service Loan Forgiveness program. The program is supposed to forgive balances of student loans for those who work in certain positions, like teachers, government lawyers, law enforcement officers, and social workers, as long as they make on-time payments for 10 years and fit certain other guidelines.

The logic behind the program is that those who qualify for it give up more lucrative future careers to work in civil service, and should be given some sort of benefit for making that choice. For example, a public defender earns an average of about $60,000 a year. First year associate jobs at Big Law firms, in contrast, are paid an annual salary of up to $180,000 at this point. Under the Public Service Loan Forgiveness program that public defender, as long as she pays her loans on time and in full, could qualify for loan forgiveness in 10 years.

The program is relatively new. The first “wave” of people who would qualify for loan forgiveness will hit their 10-year mark in October. At this point it’s unclear if the Trump Administration could affect the program for those who are already enrolled or if it would only shut down the program moving forward. Currently, there over half a million borrowers signed up.

Overall the Department of Education budget would be slashed by $10.6 billion, according to the Washington Post, which obtained a copy. Those cuts are seemingly welcomed by Education Secretary Betsy DeVos, who has consistently said that the federal government needs to step back from its involvement in education.

Of course, the Trump Administration isn’t cutting everything. In fact, Devos’ pet causes of school vouchers and charter schools will receive more funding.

Anneliese Mahoney
Anneliese Mahoney is Managing Editor at Law Street and a Connecticut transplant to Washington D.C. She has a Bachelor’s degree in International Affairs from the George Washington University, and a passion for law, politics, and social issues. Contact Anneliese at amahoney@LawStreetMedia.com.
Share:
Related ItemsBetsy DeVosCharter SchoolsDonald TrumpEducationLaw SchoolLawyersSchools