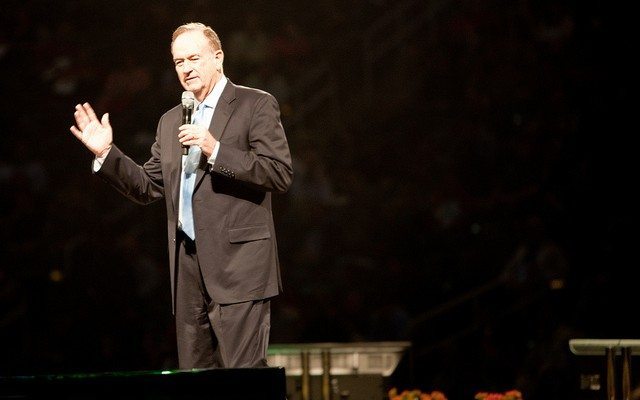 The media world is still reeling from Brian Williams’ lies–or severe misremembering, at best–about his helicopter being shot down by Iraqi forces 12 years ago. But round two with Bill O’Reilly has turned out a bit differently. It’s become clear that the Fox News host wasn’t in the thick of the war zone while covering the 1982 Falklands conflict as he’s boasted several times. In fact, he was over a thousand miles away from the heart of the action, sources told Mother Jones.

And O’Reilly, whose criticism of Williams lacked his usual bluster, hasn’t taken this sitting down.

After Mother Jones published its skepticism of O’Reilly’s representation as a “combat-hardened reporter,” O’Reilly immediately hit back, calling the reporters lying “left-wing” “guttersnipes.” When New York Times reporters questioned him soon after, he outright threatened them.

“I am coming after you with everything I have,” O’Reilly told The New York Times over the phone. “You can take it as a threat.”

For years, O’Reilly has backed up his reporting to viewers, readers, and other journalists with claims of reporting for CBS in active war zones in Argentina’s Falkland Islands, the Middle East, and Northern Ireland. He particularly emphasized surviving combat situations and rescuing his photographer during the U.K.’s war with Argentina.

“I was in a situation one time, in a war zone in Argentina, in the Falklands, where my photographer got run down and then hit his head and was bleeding from the ear on the concrete,” O’Reilly said in 2013. “And the army was chasing us. I had to make a decision. And I dragged him off, you know, but at the same time, I’m looking around and trying to do my job, but I figure I had to get this guy out of there because that was more important.”

But reporters and producers from CBS News told Mother Jones that no American correspondent reached the Falklands. Instead, they said, O’Reilly was in Buenos Aires, over a thousand miles from combat. The riots in Buenos Aires were hardly the deadly affair O’Reilly depicted.

“It wasn’t a combat situation by any sense of the word that I know,” retired CBS correspondent told CNN. O’Reilly, he said, “is trying to build it up into a more frightening and deadly situation than it was.”

So far seven former colleagues from CBS have spoken out against O’Reilly’s exaggerated version of events and claims that “many people were killed” in the riots. Newspaper archives from Argentina at the time don’t report any fatalities in Buenos Aires either, according to the Washington Post’s Erik Wemple.

What’s more, former colleagues doubt his photographer was even injured. “Nobody remembers this happening. If somebody got hurt, we all would have known,” a CBS news cameraman who was in Buenos Aires then told CNN.

After investigations into Brian Williams’ work began, NBC suspended its celebrity anchor without pay for six months. But even as allegations of further fabrication arise–O’Reilly may have lied about hearing the suicide of someone involved in President Kennedy’s assassintion–Fox News has stood by its host and his version of events.

The kicker in all this? O’Reilly’s ratings have only risen, giving him his biggest audience since the Ferguson verdict came out.