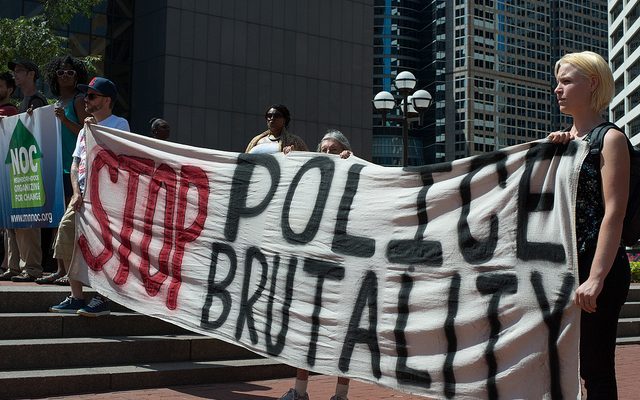 Startling viral video footage of an off-duty LAPD cop firing his gun during an altercation with teens prompted about 300 outraged demonstrators to protest in the streets of Anaheim, California late Wednesday night.

The confrontation erupted Tuesday outside of the cop’s home. Cellphone footage captured the unnamed officer grabbing onto 13-year-old Christian Dorscht, as a group made up mostly of young boys wearing backpacks stood nearby.

A physical scuffle ensued as a few of the teens attempted to fight back, until the cop dragged the boy over a hedge before pulling out his weapon and firing it. No one was injured by the gunfire.

JUST IN: Hundreds protest in Anaheim after an off-duty LAPD cop grabbed a teenager and fired his weapon during a scuffle on his lawn. pic.twitter.com/ry6W56fkh1

The LAPD officer was not arrested, but the 13-year-old boy and another 15-year-old boy were taken into custody and later released. Some early reports said they have been charged, but the details are unclear at this point. Photographs of Christian taken after he was released show bruises on his wrists and other markings on his neck from the cop pulling and dragging him.

The cop is on administrative leave while the LAPD launches an internal investigation into the officer’s actions. The department is insisting that it “began over ongoing issues with juveniles walking across the officer’s property.”

Christian’s father, Johnny Dorscht, says the scuffle actually began after the cop began swearing at one of Christian’s female friends for walking on his yard.

“My son defended her and said, ‘don’t talk to a lady like that,’” Johnny told Fusion. “That’s when the cop got mad and confronted my son, and threw him on the floor. The cop was choking him out. He got away, the cop pulled him back, and that’s when the video started.”

In one part of the uncut video, Christian is heard pleading “stop grabbing me” and “I didn’t do anything to hurt you, all I said was respect a girl.” The cop responds, “You shouldn’t have said you were going to shoot me.” Christian protests, “I didn’t say that, I said I’m going to sue you,” as he’s dragged across the lawn.

It may be some time before the LAPD announces its findings, and whether or not the officer involved will be charged with a crime.

Protesters Take to the Streets

About 300 marchers began protesting late Wednesday night. They began in the west Anaheim neighborhood where the shooting took place, before moving into the streets.

Protesters kneel with their hands up, in front of the police formation on Palais and Euclid in Anaheim. pic.twitter.com/RAjhJKwarl

A young demonstrator in #Anaheim wraps an American flag around himself as police stand nearby #anaheimprotest pic.twitter.com/X3CBHcl3Ok

Many people also posted about the incident on social media

Keep in mind this all started cuz an off-duty cop was ready to shoot children over walking in his yard. https://t.co/Efm3d4bssc

Yet they ask why Blacks and Latinx don’t trust the system? They’re shown at an early age that police can’t be trusted. #Anaheim

When I’m feeling “threatened” I always hold a kid hostage, pull out my gun, & literally drag them back to my property like prey. 🙄 #Anaheim

Alexis Evans
Alexis Evans is an Assistant Editor at Law Street and a Buckeye State native. She has a Bachelor’s Degree in Journalism and a minor in Business from Ohio University. Contact Alexis at aevans@LawStreetMedia.com.
Share:
Related ItemsAnaheimCaliforniaProtestsShooting